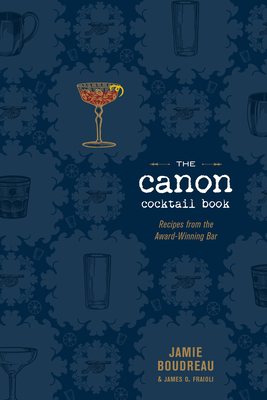 Recipes from the Award-Winning Bar

The first book from one of the world's most acclaimed bars

Home to the Western Hemisphere's largest spirit collection, Seattle bar Canon: Whiskey and Bitters Emporium has achieved unprecedented, worldwide acclaim. Named Best Bar in America by Esquire, Canon received Tales of the Cocktail Spirited Awards for World's Best Drinks Selection (2013) and World's Best Spirits Selection (2015), and Drinks International included it on their prestigious World's 50 Best Bars list. In his debut, legendary bartender and Canon founder Jamie Boudreau offers 100 cocktail recipes ranging from riffs on the classics, like the Cobbler’s Dream and Corpse Reviver, to their lineup of original house drinks, such as the Truffled Old Fashioned and the Banksy Sour. In addition to tips, recipes, and formulas for top-notch cocktails, syrups, and infusions, Boudreau breaks down the fundamentals and challenges of opening and running a bar—from business plans to menu creation. The Canon Cocktail Book is poised to be an essential drinks manual for both the at-home cocktail enthusiast and bar industry professional.


Praise For The Canon Cocktail Book: Recipes from the Award-Winning Bar…

“If you’re lucky enough to have drunk at canon, the bar, you’ll find reading Canon, the cocktail book, remarkably similar: rich in detail, surprising, sometimes challenging, and always delightful. If you haven’t been to canon, at least read the book. A few pages in and you’ll be on your phone, booking a flight to Seattle.”
—David Wondrich, author of Imbibe! and Punch

“Ever since Jamie Boudreau first opened the doors to canon, the bar has been the brightest star in Seattle’s cocktail constellation. Now, The Canon Cocktail Book promises to blast you into this whiskey-laced firmament, offering everything from insights into the bar’s day-to-day to the intricacies of preparing canon’s best drinks. Grab a shaker, and buckle up—it’s gonna be a boozy ride.”
—Paul Clarke, executive editor of Imbibe magazine and author of The Cocktail Chronicles

“The Canon Cocktail Book memorializes the ceaseless curiosity and tenacious efforts of its bitters-loving, pyromaniac author Jamie Boudreau, whose recipe catalog deftly integrates modern cooking technique with innovative classical cocktail preparation. Much more than a drink primer, Boudreau’s book is the first bar owner’s manual of the century, written by one of the world’s most celebrated publicans, whose open, honest, hard-earned wisdom is invaluable for aspiring mixologists looking to go pro.”
—Jim Meehan, author of The PDT Cocktail Book

"Boudreau is a humble and enthusiastic host, generous with his cocktail tips (including some terrific practical advice on opening a bar of one’s own) and freely giving credit where credit is due in regard to each cocktail’s origin. As for the cocktails themselves, the collection is unassailable... This terrific resource is sure to send armchair bartenders scurrying to their shakers."
—Publishers Weekly

JAMIE BOUDREAU started tending bar at age of 16. In 2011, after stints as a bartending consultant and writer, he opened Canon: Whiskey and Bitters Emporium, a bar that houses the world's largest collection of American whiskey, in Seattle.

JAMES O. FRAIOLI is an award-winning cookbook author and a 2014 James Beard Award winner for Culinary Birds: The Ultimate Poultry Cookbook. He has 20 cookbooks to his credit, with additional cookbooks in production.
Loading...
or support indie stores by buying on