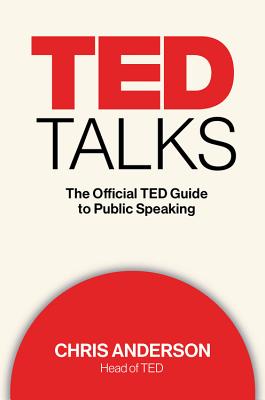 For anyone who has ever been inspired by a TED talk…

...this is an insider’s guide to creating talks that are unforgettable.

Since taking over TED in the early 2000s, Chris Anderson has shown how carefully crafted short talks can be the key to unlocking empathy, stirring excitement, spreading knowledge, and promoting a shared dream. Done right, a talk can electrify a room and transform an audience’s worldview. Done right, a talk is more powerful than anything in written form.
This book explains how the miracle of powerful public speaking is achieved, and equips you to give it your best shot. There is no set formula; no two talks should be the same. The goal is for you to give the talk that only you can give. But don’t be intimidated. You may find it more natural than you think.
Chris Anderson has worked behind the scenes with all the TED speakers who have inspired us the most, and here he shares insights from such favorites as Sir Ken Robinson, Amy Cuddy, Bill Gates, Elizabeth Gilbert, Salman Khan, Dan Gilbert, Mary Roach, Matt Ridley, and dozens more — everything from how to craft your talk’s content to how you can be most effective on stage. This is the 21st-century’s new manual for truly effective communication and it is a must-read for anyone who is ready to create impact with their ideas.

“The TED Talk has reinvented the art of rhetoric for the 21st century. Goodbye to windy academese, scientific gobbledygook, pompous moralizing, powerpoint chloroform – we now know that “ideas worth spreading” can indeed be spread far and wide, and with clarity and panache. Behind this revolution lies Chris Anderson, who had a vision that powerful ideas can improve the world and has developed a coherent philosophy and a set of guidelines for compelling communication. This book may restore rhetoric to its time-honored place as one of the essential skills of an educated citizen.” —Steven Pinker, Johnstone Professor of Psychology, Harvard University, and author of HOW THE MIND WORKS and THE SENSE OF STYLE

“Nobody in the world better understands the art and science of public speaking than Chris Anderson. He has nurtured, coaxed, and encouraged so many speakers over the years (myself included) — helping us to bring forth our very best performances onstage, even when we were at our most nervous and overwhelmed. He is the absolutely perfect person to have written this book, and it will be a gift to many.” —Elizabeth Gilbert, bestselling author of BIG MAGIC and THE SIGNATURE OF ALL THINGS

“This is not just the most insightful book ever written on public speaking—it’s also a brilliant, profound look at how to communicate. If you ever plan to utter a sound, this is a must-read. It gives me hope that words can actually change the world.” —Adam Grant, Wharton professor and New York Times bestselling author of GIVE AND TAKE and ORIGINALS

“Over the past 25 years, TED has revitalized the whole world of conferences and speaking events. Here for the first time, Chris Anderson and the TED leadership team set out all they've learnt about the dos and don'ts of public speaking. An essential read for all event organizers and speakers. Is there a single recipe for a great speech? Of course not. But there are some essential ingredients, which the TED team sets out here with concision, verve and wit (which are also some of the ingredients). An inspiring, contemporary guide to the venerable arts of oratory.”  —Sir Ken Robinson, best-selling author of THE ELEMENT, OUT OF OUR MINDS, and CREATIVE SCHOOLS.

“The TED Talk may well be the defining essay genre of our time: what the pamphlet was to the 18th-century, and the newspaper Op-Ed was to the twentieth. TED Talks is the guidebook to this new language, written by the man who made into it a global force.” —Steven Johnson, bestselling author of HOW WE GOT TO NOW

“Anderson shares the secrets behind the best TED presentations, believing that anyone can be taught the skills to deliver a compelling speech—TED-style or otherwise. It’s all presented very naturally and with an upbeat, positive tone …. readers will be able to use the techniques for any manner of public speaking.” —Booklist

“[Anderson] covers important topics such as making a personal connection with audiences, explaining complicated subjects to laypeople, priming people to accept counterintuitive ideas, and cultivating a sense of showmanship. He also addresses aspects of preparation, such as knowing what vocal styles to avoid, planning attire, and managing nervousness.This is an invaluable guide to effective presentations, and catnip for all the TED fans out there.” —Publishers Weekly

CHRIS ANDERSON is the curator of TED. Trained as a journalist after graduating from Oxford University, Anderson launched a number of successful magazines before turning his attention to TED, which he and his nonprofit acquired in 2001. His TED mantra—“ideas worth spreading”—continues to blossom on an international scale. He lives with his family in New York City.
Loading...
or
Not Currently Available for Direct Purchase