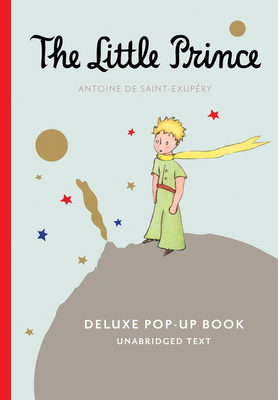 After being stranded in a desert after a crash, a pilot comes in contact with a captivating little prince who recounts his journey from planet to planet and his search for what is most important in life.  For over sixty-five years Antoine de Saint-Exupery's classic, The Little Prince, has captured readers' hearts. The whimsical story with a fairy tale feel has sold over 3 million copies in all formats. This exciting pop-up edition includes the complete original text accompanied by Saint-Exupery's beautiful illustrations brought to life through paper engineering. Perfect for longtime fans and those meeting the little prince for the first time!

Praise For The Little Prince Deluxe Pop-Up Book with Audio…

"Delineated with a delicate touch, the paper engineering adds a new dimension to this wistful fairy tale without overpowering it, enhancing the story’s subtleties and echoing its sense of wonder."--School Library Journal "This lovely edition boasts the complete original text and illustrations that are also a delight for the eyes."--Entertainment Weekly "While a pop-up edition of de Saint-Exupery's enduring tale may initially seem like a gimmick, the resulting volume is a beautiful piece of bookmaking that actually extends the classic story ... this unabridged volume offers a creative, accessible entree to the timeless story."--Booklist "The pleasing visual effects are subtle, but add an appropriate sense of magic."--Publishers Weekly —