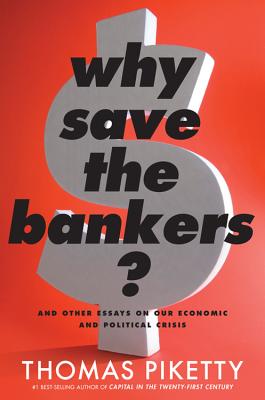 Why Save the Bankers?

And Other Essays on Our Economic and Political Crisis

Incisive commentary on the financial meltdown and its aftermath, from the author of the bestselling global phenomenon Capital in the Twenty-First Century

Thomas Piketty's work has proved that unfettered markets lead to increasing inequality. Without meaningful regulation, capitalist economies will concentrate wealth in an ever smaller number of hands. Armed with this knowledge, democratic societies face a defining challenge: fending off a new aristocracy.

For years, Piketty has wrestled with this problem in his monthly newspaper column, which pierces the surface of current events to reveal the economic forces underneath. Why Save the Bankers? brings together selected columns, now translated and annotated, from the period book-ended by the September 2008 collapse of Lehman Brothers and the Paris attacks of November 2015. In between, writing from the vantage point of his native France, Piketty brilliantly decodes the European sovereign debt crisis, an urgent struggle against the tyranny of markets that bears lessons for the world at large. And along the way, he weighs in on oligarchy in the United States, wonders whether debts actually need to be paid back, and discovers surprising lessons about inequality by examining the career of Steve Jobs.

Coursing with insight and flashes of wit, these brief essays offer a view of recent history through the eyes of one of the most influential economic thinkers of our time.

Praise For Why Save the Bankers?: And Other Essays on Our Economic and Political Crisis…

"Coming on the heels of his masterwork, Capital in the Twenty-First Century, one might expect this to be the lesser contribution. In fact, Piketty unleashed on real-time economics is a revelation: he is lucid and persuasive — all the more so for being proved right about most of the events he is responding to, even though the full facts only came out later ... Piketty draws on a vast and unusual store of honesty and emotional intelligence." — PAUL MASON, GUARDIAN

"How one economist tried to make sense of a rapidly changing world ... These columns are informed by Piketty's academic work, but the language he uses is both more accessible and more direct ... Universally applicable ... Delicious." — NEW STATESMAN

"The perfect accoutrement for a Bernie Sanders rally." — BLOOMBERG BUSINESSWEEK

"Piketty fans will be fascinated ... He explains economic concepts to the lay reader with the kind of clarity that comes from a deep understanding of the topic." — INDEPENDENT

"Piketty is back ... As with Capital, Piketty remains quietly optimistic." — EVENING STANDARD

"Piketty is known for his lucid, effective writing, and delivers more of it in Why Save the Bankers? ... Anyone with an interest in politics, monetary policy or international diplomacy will get a kick out of [it]... A series of short, sometimes very funny, calls to common sense." — SHELF AWARENESS

"Part of Piketty's charm lies in the fact that he doesn't mince words ... But his blunt statements are tempered with smart, analytical arguments ... Lessons and warnings [that] the entire world needs to hear." — POPMATTERS

"Impressive ... These excellent essays presuppose little knowledge of economics and provide an overview in nontechnical language of events in the news in Europe, which have relevance to the United States ... Should appeal to lay readers and subject specialists alike." — LIBRARY JOURNAL (starred review)

"Easy to follow for readers without much knowledge of economics, especially when [Piketty] picks apart topics that defy classical economic logic; in this he resembles Paul Krugman, who similarly writes clearly on complex topics ... Helps make sense of recent financial history." — KIRKUS REVIEWS

"Piketty, the French Paul Krugman, has an extraordinary knack for translating the complexities of central bank finance, tax policy, regulation, and macroeconomics into lucid, down-to-earth language enriched by shrewd historical and cultural insights. This is a compelling challenge to economic orthodoxy." — PUBLISHERS WEEKLY

"Remember when everyone was obliged to pretend to have read Piketty's 700-page tome Capital in the Twenty-First Century? Now [comes] a Piketty for the proletariat, compiling eight years of the economist’s columns written for the French magazine Libération. The book begins in September 2008 just after the collapse of Lehman Brothers and takes readers through the aftermath of the crisis that followed, offering Pikettian analysis of the Obama presidency and the European Union’s debt woes." — THE MILLIONS, 2016 Most Anticipated Nonfiction

"The questions explored in these brilliant essays cut to the heart of our failing economic and democratic systems. If you have been influenced by Piketty's landmark work on inequality, make sure to read this next." — NAOMI KLEIN, author of The Shock Doctrine and This Changes Everything

THOMAS PIKETTY is professor of economics at the Paris School of Economics and the École des hautes études en sciences sociale, and Centennial Professor at the London School of Economics's International Inequalities Institute. He is the author of numerous articles and a dozen books. He has done major historical and theoretical work on the interplay between economic development and the distribution of income and wealth. His most recent book is Capital in the Twenty-First Century. He lives in Paris, France.

SETH ACKERMAN is a historian of 20th-century Europe. He is an editor at Jacobin, where his translations have previously been published.
Loading...
or
Not Currently Available for Direct Purchase