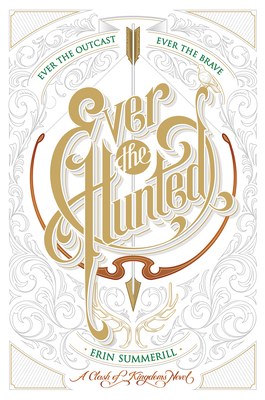 Ever the Hunted (A Clash of Kingdoms Novel) (Hardcover)

"With a resourceful and cunning heroine, a compelling and nuanced romance, and a truly fascinating system of magic, Ever the Hunted ensnared me from the very first pages. Absolutely marvelous."—Sarah J. Maas, New York Times bestselling author of the Throne of Glass and A Court of Thorns and Roses series

Seventeen year-old Britta Flannery is at ease only in the woods with her dagger and bow. She spends her days tracking criminals alongside her father, a legendary bounty hunter—that is, until her father is murdered. The alleged killer is none other than Cohen Mackay, her father’s former apprentice. The only friend she’s ever known. The boy she once loved who broke her heart.
She must go on a dangerous quest in a world of warring kingdoms, mad kings, and dark magic to find the real killer. But Britta wields more power than she knows. And soon she will learn what has always made her different will make her a force to be reckoned with.

Erin Summerill was born in England. After spending years bouncing between Air Force bases in Hawaii, England, and California, her family finally settled down in Utah. When Erin doesn’t have her nose in a book, she’s busy chasing after her four kids, two dogs, and a cat. Visit her online at erinsummerill.com and follow her on Twitter: @erinsummerill.

Praise For Ever the Hunted (A Clash of Kingdoms Novel)…

"With masterful world building, Summerill takes the reader on a journey to another time, where two kingdoms are on the verge of war... This is a story about love, family and determination that leaves the reader excited for the next volume."—DESERET NEWS

“Ensnaring… With a lush setting and intriguing political conflicts, this fierce tale is the story of Britta Flannery, an expert hunter, who must find the man who killed her father.”—THE DAILY HERALD (UT)

“Ever the Hunted blends magic, politics, and revenge into an exciting read from a fantastic new voice.”—PASTE MAGAZINE

“Summerill builds a rich… fantasy world filled with both mystical powers and realistic political conflicts... Romance lovers will be happy with the simmer relationship between Britta and Cohen.” —BOOKLIST

"A solid choice for fantasy readers who prefer a large helping of adventure with their romance." —KIRKUS

“Those who enjoy fantasy adventure will love this novel and immediately want to continue with the next.” —SCHOOL LIBRARY CONNECTION

"With a resourceful and cunning heroine, a compelling and nuanced romance, and a truly fascinating system of magic, Ever the Hunted ensnared me from the very first pages. Absolutely marvelous."—Sarah J. Maas, New York Times-bestselling author of the Throne of Glass books

"A fascinating world, intriguing characters, and an adventure with plenty of thrilling twists and turns will keep readers turning pages long into the night."—C.J. Redwine, New York Time's best selling author of The Shadow Queen

"Erin Summerill showcases stellar worldbuilding in her debut novel Ever the Hunted. She uses artful prose to tell a captivating story that is emotionally engaging and hard to put down. I can't wait to read the sequel!"—Charlie N. Holmberg, author of The Paper Magician series