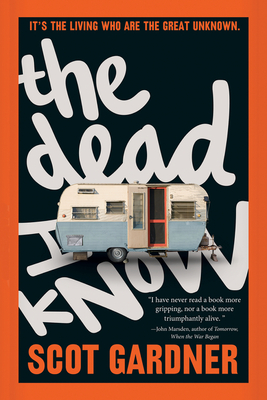 The Dead I Know

Aaron Rowe walks in his sleep and haunted by dreams he can’t explain and memories he can’t recover. Death doesn’t scare him—his new job with a funeral director may even be his salvation. But if he doesn’t discover the truth about his hidden past soon, he may fall asleep one night and never wake up. In this dark and witty psychological drama about survival, Aaron finds that making peace with the dead may be easier than coming to terms with the living.

Praise For The Dead I Know…

"I have never read a book more gripping, nor a book more triumphantly alive. I love how it haunts me still. I swear, I will never forget The Dead I Know."
—John Marsden, author of Tomorrow, When the War Began

* "Despite the heavy topics explored in the novel . . . Gardner writes with sensitivity and in a way that is accessible to teens. With humorous interactions and their unwavering belief that Aaron is worthwhile, Mr. Barton and his daughter, Skye, help him appreciate life in the midst of death and tragedy. A darkly funny book."
—School Library Journal, starred review

* "Each plotline is woven skillfully in among the others, and each is resolved with gravity, dignity and care. The sense of family—both found and lost—is palpable throughout. Simply told and powerfully moving."
—Kirkus, starred review

"Gardner's descriptions of funeral work compellingly mix dark humor and a respectful tone. Aaron's mother's health, his dark past, and the question of whether he can embrace his new life combine in an engaging through line that will engross readers."
—Booklist

"Moments of warmth and humor lighten the psychological suspense and frank depiction of death in Gardner's engrossing novel."
—Horn Book

* "Despite hints of the past and hope for the future, the story remains firmly grounded in the present, with a sense of immediacy that draws the reader in . . . Readers looking for a tightly crafted character-driven story will happily find themselves making friends with the darkly strange Aaron."
—Bulletin, starred review

Scot Gardner has worked as a truck driver, professional musician, masseur, waiter, counselor, and author. He lives in Melbourne, Australia, with his wife and three children. Visit his website at www.scotgardner.com.
Loading...
or
Not Currently Available for Direct Purchase