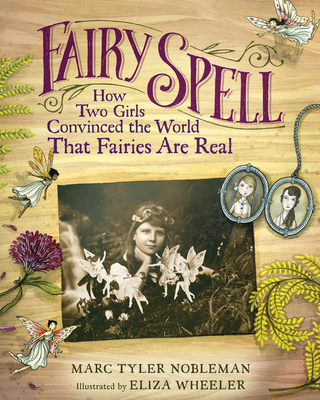 How Two Girls Convinced the World That Fairies Are Real

The true story of British cousins who fooled the world for more than 60 years with a remarkable hoax, photographs of “real” fairies. Exquisitely illustrated with art by Eliza Wheeler as well as the original photos taken by the girls.

In 1917, in Cottingley, England, a girl named Elsie took a picture of her younger cousin, Frances. Also in the photo was a group of fairies, fairies that the girls insisted were real. Through a remarkable set of circumstances, that photograph and the ones that followed came to be widely believed as evidence of real fairies. It was not until 1983 that the girls, then late in life, confessed that the Cottingley Fairies were a hoax. Their take is an extraordinary slice of history, from a time when anything in a photograph was assumed to be fact and it was possible to trick an eager public into believing something magical. Exquisitely illustrated with art and the original fairy photographs.

Eliza Wheeler has illustrated several picture books including Miss Maple’s Seeds, which she also wrote and which debuted on the NYT bestseller list, and Wherever You Go, written by Pat Zietlow Miller, a Crystal Kite winner. She lives in Los Angeles, California. Visit her online at wheelerstudio.com, and on Twitter and Instagram at @WheelerStudio.

Praise For Fairy Spell: How Two Girls Convinced the World That Fairies Are Real…

"A fascinating introduction to one of the greatest hoaxes of all time, deftly pitched to elementary-age children."—Kirkus

"This recounting of a fanciful, enchanting fraud will leave younger children guessing until the end, and many more readers will embrace the suspension of disbelief."—Publishers Weekly

"Nobleman’s text is a rich overview of this bizarre historical controversy; he deftly navigates topics [...] without ever weighing down the central narrative."—School Library Journal

"With a crisp and engaging style, Nobleman relates this fascinating story, providing ample context for readers by presenting information about the attitudes and conditions of early-twentieth-century England."—Horn Book Magazine

"Part accidental trickster tale, part unforgettable fairy tale, all true, this will have kids reaching for cameras of their own in no time."--Booklist