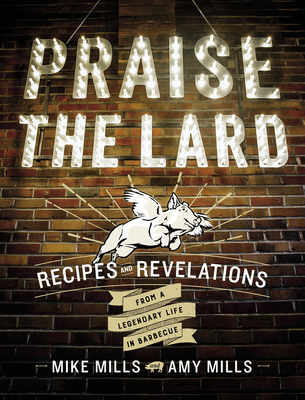 Recipes and Revelations from a Legendary Life in Barbecue

Signature recipes and wisdom from the country's foremost pitmaster

Mike Mills and Amy Mills, the dynamic father-daughter duo behind the famous 17th Street Barbecue, are two of the most influential people in barbecue. Known as “The Legend,” Mike is a Barbecue Hall-of-Famer, a four-time barbecue World Champion, a three-time Grand World Champion at Memphis in May (the Super Bowl of Swine), and a founder of the Big Apple Block Party. A third-generation barbecuer, Amy is the marketing mind behind the business, a television personality, and industry expert.

Praise the Lard, named after the Mills' popular Southern Illinois cook-off, now in its thirtieth year, dispenses all the secrets of the family’s lifetime of worshipping at the temple of barbecue. At the heart of the book are almost 100 recipes from the family archives: Private Reserve Mustard Sauce, Ain’t No Thang but a Chicken Wing, Pork Belly Bites, and Prime Rib on the Pit, Tangy Pit Beans, and Blackberry Pie. With hundreds food photos, candids, and illustrations, this book is as rich as the Mills’ history.

Praise For Praise The Lard: Recipes and Revelations from a Legendary Life in Barbecue…

“There are no two names more lovingly synonymous with barbecue scripture than Mike Mills and Amy Mills, the dynamic father-daughter duo out of Murphysboro, Illinois, whose new barbecue bible Praise the Lard is sure to become gospel to aspiring pitmasters and home smokers alike. Mike, whose infectious passion and charm inspired me to bring regional barbecue to New York City, understands instinctively that barbecue—with all its ritual and tradition—is the very essence of hospitality. Whether you’re a seasoned pro or new to the pit, Mike and Amy patiently walk you through the process from whole hog to the very last fixin’, peppering in plenty of personality and helpful tips along the way. Praise the Lard guarantees a trip to the altar of ’cue.“ — Danny Meyer, CEO, Union Square Hospitality Group    “A must for anyone who loves BBQ. There is not a human on earth who I admire more when it comes to smoking meat. They call Mike Mills ‘the legend,’ and believe it or not, I think that label is an understatement.” — Michael Symon, James Beard Award-winning chef, restaurateur, television personality, and author   “For years, we’ve been fans of Mike, Amy, and the 17th Street Barbecue crew—trading cocktails for ribs every summer during the Big Apple Barbecue Block Party in New York City. This book represents the perfect invitation for readers to join that world. The recipes are incredible, but the stories and soul expressed on its pages are what make this a truly special read.” — Will Guidara and Daniel Humm, Eleven Madison Park, NoMad, and Make It Nice   Barbecue is in the blood of this father and daughter duo, who share a definite fondness for hog fat, beef tallow, and the barbecue “holy trinity” of seasoning, smoke, and sauce. Champion pitmaster Mike is a partner at New York’s Blue Smoke and overseer of the 17th Street Bar & Grill in Murphysboro, Ill. Amy runs OnCue, a barbecue consultancy. Here they provide 100 family recipes, some more down-home than others. Brisket dumplings, for example, employ a Korean marinade and a dipping sauce with rice vinegar and pear juice, and their pork belly porchetta is stuffed with Italian sausage. But in an excellent chapter of pit-smoked meats, poetry and Americana run deep in dishes such as bourbon-buttered reverse-sear double-cut pork chops, and “Meat Me in St. Louis” ribs flavored with apple juice and a raspberry-chipotle sauce. Mason jars become parfait cups for a grits and collard parfait, as well as for a barbecue parfait that begins with layers of Fritos and baked beans and then is topped with whatever leftovers are at hand. The authors take porcine liberties in a chapter of libations that include a Salty Pig (ironically rimmed with kosher salt) and a Pork and Stormy, with bacon-washed bourbon and ginger beer.  — Publishers Weekly    —