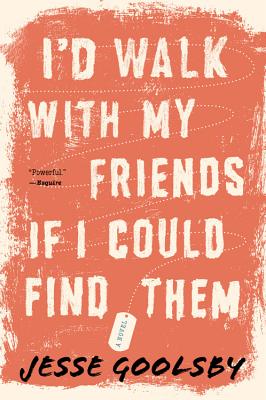 I'd Walk with My Friends If I Could Find Them

“Symphonic . . . One of the best works of literature to come from these wars.” — storySouth

“It’s almost like every aspect of life and loss is in there.” — NPR


Wintric Ellis joins the army as soon as he graduates from high school, saying goodbye to his girlfriend, Kristen, and to the backwoods California town whose borders have always been the limits of his horizon. Deployed in Afghanistan two years into a directionless war, he struggles to find his bearings in a place where allies could at any second turn out to be foes. Two career soldiers, Dax and Torres, take Wintric under their wing. Together, these three men face an impossible choice: risk death or commit a harrowing act of war. The aftershocks echo long after each returns home to a transfigured world. I’d Walk with My Friends If I Could Find Them is a vital meditation on the weight of war and a humane tale of love, family, and connection at any cost.

Jesse Goolsby’s fiction and essays have appeared in Narrative, the Kenyon Review, and elsewhere. He is the recipient of the Richard Bausch Short Story Prize, the John Gardner Memorial Prize in Fiction, and other honors. A U.S. Air Force officer, he lives in Tallahassee.

Longlisted for the Center for Fiction Flaherty-Dunnan First Novel Prize

"Traveling back and forth through time, Goolsby explores the challenges these men face before,during, and after their military tours, portraying their stresses vividly and palpably. While depicting realistic and personal images of the psychological traumas of war, he leaves...readers to draw their own conclusions."— BOOKLIST

"This bracing, riveting debut opens in Afghanistan, and actions there shadow the lives of Goolsby's characters. But it's the accidents, debts, and desires of the home front that continue to wreak havoc as war memories turn into just that — memories — and soldiers mired in the past realize that tackling the future may be their true struggle after all."—SIOBHAN FALLON, author of You Know When the Men Are Gone

"I'd Walk with My Friends If I Could Find Them offers a heartbreaking and humane lens into the lives of those connected to war, refusing to avert its gaze when confronted with even the most gut-wrenching situations. Jesse Goolsby recognizes that the battlefield stretches far beyond the demarcations of a combat zone, or the borders of Afghanistan. That said, this is not strictly a book about war — this is a book about the human heart. This is the news, rarely told, of the actual world we live in."—BRIAN TURNER, author of My Life as a Foreign Country

“Long after the combatants and non-combatants alike have vanished from this earth, the afterlife of war is a book, war’s only survivor, and every true book about war cries out, Stop, or at least, Remember. I’d Walk with My Friends If I Could Find Them, Jesse Goolsby’s ambitious, multi-layered, brutally honest debut novel, is such a book, an antidote to our nation’s disconnect from our misadventures overseas.”—BOB SHACOCHIS, author of The Woman Who Lost Her Soul

"Not only is Jesse Goolsby one of the very rare authors who writes with authoritative insight into the warfare of the 21st century, he does so with an even deeper insight into the profound yearning for connection, for identity, that drives us all.  Goolsby is a consummate artist, and the publication of I’d Walk with My Friends If I Could Find Them is a major literary event.”—ROBERT OLEN BUTLER, author of A Good Scent from a Strange Mountain

"Ijust read the most satisfying novel in years, Jesse Goolsby's I'd Walk with My Friends If I Could Find Them. Itis not just a war novel, but rather an earthquake-in-your-soul novel. That art that shakes you down. I am blown away."—MICHAEL GARRIGA, author of The Book of Duels

JESSE GOOLSBY is an Air Force officer and the author of the novel I'd Walk with My Friends If I Could Find Them. His fiction and essays have appeared in Narrative, Epoch, the Literary Review,Alaska Quarterly Review, the Greensboro Review, and other publications. He is the recipient of the Richard Bausch Fiction Prize, the John Gardner Memorial Award in Fiction, and a Holland & Knight Distinguished Fellowship from the Hambidge Center for the Creative Arts. He has earned honorable mentions in both The Best American Essays and The Best American Short Stories, and his work has been included in The Best American Mystery Stories. Goolsby was raised in Chester, California, and now lives in Tallahassee, Florida.
Loading...
or
Not Currently Available for Direct Purchase