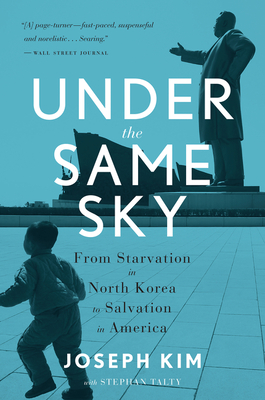 Under the Same Sky (Paperback)

From Starvation in North Korea to Salvation in America

A searing story of starvation and survival in North Korea, followed by a dramatic escape, rescue by activists and Christian missionaries, and success in the United States thanks to newfound faith and courage

Inside the hidden and mysterious world of North Korea, Joseph Kim lived a young boy’s normal life until he was five. Then disaster struck: the first wave of the Great Famine, a long, terrible ordeal that killed millions, including his father, and sent others, like his mother and only sister, on desperate escape routes into China. Alone on the streets, Joseph learned to beg and steal. He had nothing but a street-hardened survival instinct. Finally, in desperation, he too crossed a frozen river to escape to China.

There a kindly Christian woman took him in, kept him hidden from the authorities, and gave him hope. Soon, through an underground network of activists, he was spirited to the American consulate, and became one of just a handful of North Koreans to be brought to the U.S. as refugees. Joseph knew no English and had never been a good student. Yet the kindness of his foster family changed his life.  He turned a new leaf, became a dedicated student, mastered English, and made it to college, where he is now thriving thanks to his faith and inner strength. Under the Same Sky is an unforgettable story of suffering and redemption.

JOSEPH KIM was born in North Korean in 1990. In 2007 he came to the United States, where he completed high school and went to college in New York City.

STEPHAN TALTY is the award-winning author of Agent Garbo,Empire of Blue Water, and other best-selling works of narrative nonfiction. His books have been made into two films, the Oscar-winning Captain Phillips and Only the Brave. He is also the author of two psychological thrillers, including the New York Times bestseller Black Irish, set in his hometown of Buffalo. He has written for the New York Times Magazine,GQ, and many other publications. Talty now lives outside New York City with his family.

Praise For Under the Same Sky: From Starvation in North Korea to Salvation in America…

“Vital to our understanding of life in North Korea.”
—Washington Post

"There's something riveting about his honesty; he portrays the bleak conditions, dwindling resources, eternal uncertainty, and loss of dignity with an unashamed matter-of-factness almost at odds with the desperate circumstances...Kim's tale is a vital insight into a little-understood country and a modern day tragedy."
—Publishers Weekly, starred review

"This short, brutish book—with chapter-ending cliffhangers presaging the next hard twist—will enlighten readers as to the devastating hardships facing those living in North Korea during the 'great famine.'"
—Booklist
“Told with poise and dignity, Kim’s story…provides vivid documentation of a remarkable life. It also offers an important account of atrocities committed within North Korea that have been hidden from the West—and indeed, most of the rest of the world. A courageous and inspiring memoir.”
—Kirkus Reviews
or support indie stores by buying on
Copyright © 2020 American Booksellers Association