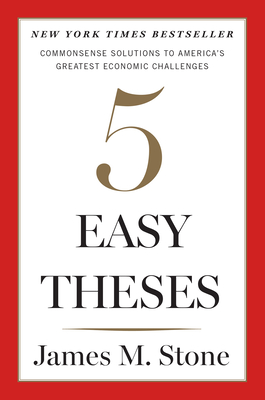 America today confronts a host of urgent problems, many of them seemingly intractable, but some we are entirely capable of solving. In Five Easy Theses, James M. Stone presents specific, common-sense solutions to a handful of our most pressing challenges, showing how simple it would be to shore up Social Security, rein in an out-of-control financial sector, reduce inequality, and make healthcare and education better and more affordable. The means are right in front of us, Stone explains, in various policy options that — if implemented — could preserve or enhance government revenue while also channeling the national economy toward the greater good.

Accessible and thought provoking, Five Easy Theses reveals that a more democratic, prosperous America is well within our reach.

James M. Stone is the founder and chief executive of the Plymouth Rock group of insurance companies, former chairman of the U.S. Commodity Futures Trading Commission, former Commonwealth of Massachusetts Insurance Commissioner, and an active philanthropist.  He has served on the boards of directors of the Boston Globe, Cold Spring Harbor Laboratory (a leading genetics institute), Management Sciences for Health (an international humanitarian non-profit), and Global Post (a worldwide news service).  He holds a Ph.D. in economics from Harvard University and has spoken or published frequently in the field of the finance and economics.  He is a Fellow of the American Academy of Art and Sciences.  Stone is married and the father of twins.  He lives in Boston.

“Five Easy Theses sets out key issues of public policy easy to identify in concept but long unresolved in practice. Stone proposes sensible approaches to breaking the long-standing political deadlock. The specific measures to deal with budgetary balance, income inequality, public education, healthcare, and financial reform should provide a guide for constructive debate as we choose our next president.”
—Paul A. Volcker, chairman of the Federal Reserve (1979 to 1987) under Presidents Carter and Reagan and currently chairman of the Volcker Alliance

“Jim Stone has seen health care from all sides and cuts through the complexities to what really matters beautifully.”
—Atul Gawande, author of Being Mortal

“An important book for readers of any political stripe who want to get beyond the current domestic policy impasse.  You may not agree with everything Stone advocates, but every argument he makes is worthy of serious attention.”—Tom Daschle, Former U.S. Senate Majority Leader (Democrat, S. Dakota)

“Jim Stone's book shows that we can indeed solve many of the nation's seemingly intractable problems if we follow clear headed, non-partisan thinking.  If you care about our future, you should read this book.”—David T. Ellwood, Scott M. Black Professor of Political Economy and Former Dean of the Harvard Kennedy School of Government

“Five Easy Theses provides clear-eyed and non-technical explanations of five pressing economic issues: health-care costs, income inequality, government debt, college affordability, and financial-sector reform. These are some of the most complex policy challenges we face, all with multiple possible solutions. Even readers who don’t agree with Stone’s proposed policy responses will appreciate his straightforward and thought-provoking presentation of the issues.”—Christina Paxon, President of Brown University, for Bloomberg, "Best Books of 2016"

“Stone has written a powerful, thought-provoking book.  Whatever your political party or philosophy, you need to take all five of his theses seriously.”—Clayton Yeutter, former Chairman, Republican National Committee, and former United States Secretary of Agriculture

“An extraordinarily impressive and important book. Stone is smart, balanced, and sensible, three traits that are in desperately short supply in our discourse about the future of the country.  His analysis is penetrating, logical and powerful, without ideological spin. Every policy idea he presents follows from that logic. You don't have to agree with all of his proposals to realize his book’s value to politicians, policymakers, and citizens everywhere.” —Norman Ornstein, author, political scientist, and resident scholar at the American Enterprise Institute

“This book is a recipe for restoring America’s greatness.  Stone offers thoroughly persuasive solutions to five economic and social problems we often consider insoluble.  The more closely we follow his prescriptions, the brighter our national future will be.”—Stephen Kinzer, author of All the Shah’s Men and The Brothers

“James Stone’s Five Easy Theses is masterfully written, straightforward, and free of jargon.  The marvelous chapter on income and wealth distribution presents a compelling essay on inequality in the United States.  Stone speaks with particular and rare authority on these issues. People should listen to what he has to say.”— Janet Gornick, Director, Luxembourg Income Study, and Professor of Political Science and Sociology, Graduate Center, City University of New York

“Well-crafted and highly engaging, James Stone’s Five Easy Theses takes on five of the nation’s biggest problems and offers solutions that are as simple and accessible as they are illuminating.  Particularly at a time of intense partisan polarization, Five Easy Theses is refreshingly honest—a model of straight talk.  Readers may not agree with everything Stone proposes, but they’ll marvel at his command of the issues and finish the book with a new sense of possibility and much to cheer about.”—David A. Moss, John G. McLean Professor of Business Administration, Harvard Business School

“A pithy, well-documented distillation of pressing public policy issues including the causes of America’s annual trillion dollar overspend on healthcare—and what, in practical terms, we could do as a nation to substantially lower costs, and perhaps even improve outcomes.  In vivid prose that combines convincing evidence and compelling stories, Stone persuasively argues that a universal, single-payer system should replace our highly inflationary patchwork of private insurance and government programs.”—Jonathan D. Quick, MD, MPH, Management Sciences for Health, Global Health Council, and Harvard Medical School

"In Five Easy Theses, Stone tackles the tough issues:  our educational divide, inequality, and eroding retirement security.  Not everyone will agree with him on the details of every proposal.  But his bold ideas for reform bring a combination of compassion and insight to the national debate."—Alicia H. Munnell, Peter F. Drucker Professor of Management Sciences, Carroll School of Management; Director, Center for Retirement Research at Boston College; and former Assistant Secretary of the Treasury

“This book is eminently readable, accessible, and sensible. It should be required reading for every member of Congress. Jim Stone understands the issues, the underlying tradeoffs, and the very real choices that must be made if we as a nation are to address our greatest economic challenges.”
—Lawrence S. Bacow, President of Tufts University (2001-2011)