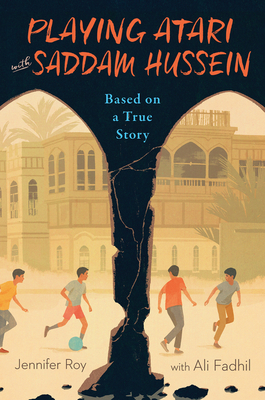 At the start of 1991, eleven-year-old Ali Fadhil was consumed by his love for soccer, video games, and American television shows. Then, on January 17, Iraq’s dictator Saddam Hussein went to war with thirty-four nations led by the United States.

Over the next forty-three days, Ali and his family survived bombings, food shortages, and constant fear. Ali and his brothers played soccer on the abandoned streets of their Basra neighborhood, wondering when or if their medic father would return from the war front. Cinematic, accessible, and timely, this is the story of one ordinary kid’s view of life during war.


Praise For Playing Atari With Saddam Hussein: Based on a True Story…

"What strikes are the mundane aspects of the brief war: going out to play and explore a familiar but ruined neighborhood, the boredom and fear of awaiting scheduled airstrikes, living with uncertainty about loved ones returning home. Still, there’s room for optimism and humor despite Fadhil’s harrowing experience."—Booklist   "Roy (Jars of Hope) and Fadhil, an interpreter during Hussein’s trial, offer a window into what Ali calls “the true Iraq” and a disturbing but accessible portrait of a civilian child’s perspective on war."-Publishers Weekly   "This blending of biography, historical fiction, and realistic fiction paints a vivid portrait of daily family life in Iraq and the trials many faced."--School Library Journal —

Jennifer Roy is the author of the highly acclaimed Yellow Star, which won a Boston Globe-Horn Book Honor Award for Excellence in Children’s Literature, was an ALA Notable Book, a School Library Journal Best Book, and a NYPL Top Book. She is also the author of Cordially Uninvited and Mindblind and the coauthor of the Trading Faces series.
www.jenniferroy.com
Twitter:@Jenroybook

Ali Fadhil grew up in Iraq and survived two wars by the age of twelve. He worked as an interpreter at Saddam Hussein’s trial and with the U.S. Army in Iraq and Afghanistan. He lives in Dublin, Ohio.