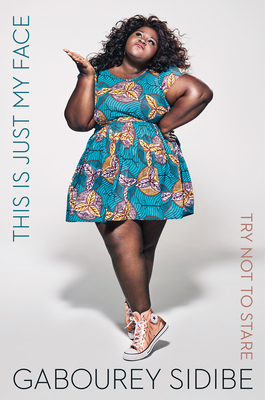 Gabourey Sidibe—“Gabby” to her legion of fans—skyrocketed to international fame in 2009 when she played the leading role in Lee Daniels’s acclaimed movie Precious. In This Is Just My Face, she shares a one-of-a-kind life story in a voice as fresh and challenging as many of the unique characters she’s played onscreen. With full-throttle honesty, Sidibe paints her Bed-Stuy/Harlem family life with a polygamous father and a gifted mother who supports her two children by singing in the subway. Sidibe tells the engrossing, inspiring story of her first job as a phone sex “talker.” And she shares her unconventional (of course!) rise to fame as a movie star, alongside “a superstar cast of rich people who lived in mansions and had their own private islands and amazing careers while I lived in my mom's apartment.”

Sidibe’s memoir hits hard with self-knowing dispatches on friendship, depression, celebrity, haters, fashion, race, and weight (“If I could just get the world to see me the way I see myself,” she writes, “would my body still be a thing you walked away thinking about?”). Irreverent, hilarious, and untraditional, This Is Just My Face will resonate with anyone who has ever felt different, and with anyone who has ever felt inspired to make a dream come true.

Praise For This Is Just My Face: Try Not to Stare…


"This memoir [is] a book you will want to give your daughter." —The New York Times

"A read that lives up to the unforgettable attitude of its name...This is Just My Face will make you fall in love with this funny, talented, gorgeous, bad bitch of a woman." —Glamour

"A mix of complexity, intelligence and humor, Gabby's book promises to be as big a success as her acting." —People

"Her talent to entertain...is evident on every page...Genuine and accessible...[Sidibe] has so much material from her childhood and adolescence that she might have been able to sell a memoir before she landed her first movie role...This Is Just My Face doesn’t capture just Sidibe that celebrity, but Sidibe the storyteller." —The A.V. Club

"Gabourey Sidibe's memoir isn't your average celebrity memoir. It's good. Really good. And not just because it's revealing (although that it is), but because it's well-written... Observant and funny, but not indulgent or try-hard." —Cosmopolitan Online

"Gabby hilariously, radically, and fearlessly holds nothing back in This Is Just My Face: Try Not to Stare. And we love her for it." —HelloGiggles, "7 Celebrity Memoirs We Can't Wait to Read This Year"

“Unflinchingly honest.” —Bustle, "9 Books By Celebrity Women Being Released in 2017 To Add To Your TBR"

“Gabourey Sidibe has a knack for speaking her mind in ways both touching and hilarious.” —Cosmopolitan, "10 Books You Need to Read in 2017"

"[Sidibe] delivers a much-awaited memoir—wise, complex, smart, funny—a version of the American experience different from anything we’ve read... Irreverent, hilarious, and untraditional, This Is Just My Face takes its place and fills a void on the shelf of writers from Mindy Kaling to David Sedaris to Lena Dunham." —BookBub

“Gabourey Sidibe’s delightful memoir This Is Just My Face: Try Not To Stare offers a memorable look into what happens when a black girl’s dreams come true, from the inside out. From her unique childhood as the daughter of a subway singer mother and polygamous father to struggling with depression to getting the role of Precious, Sidibe is fearless, incredibly funny and gorgeously open. What she offers of herself in these pages is a gift.”—Roxane Gay

"Here, Gabourey Sidibe cements her status as gives-zero-effs queen of Hollywood AND perceptive best friend in your head. Frank, funny, and insanely charming, these stories reveal the girl behind the gown and show Hollywood for what it really is: a wet t-shirt contest of an industry that sometimes redeems itself by picking the right star. Gabby is that star, and you'll root for her on every page--we are blessed by her honesty, passion and wit.”—Lena Dunham

“’I just wrote the truth, and it made me feel better.’ That is the theme of this unique and universal book by a young woman who is both a total surprise and an instant classic.  Gabby combines New York and Senegal, the streets and the heights, bravery and self-doubt, laughing and seriousness.  Her truth helps us to find ours—and what could be a bigger gift than that?”—Gloria Steinem

GABOUREY SIDIBE is an award-winning actress who is best known for the title role of Precious, based on the novel Push by Sapphire. She has since starred as Queenie in FX’s American Horror Story: Coven and Denise in Difficult People, and can currently be seen as Becky on Fox's smash hit sensation Empire. This Is Just My Face is her first book.