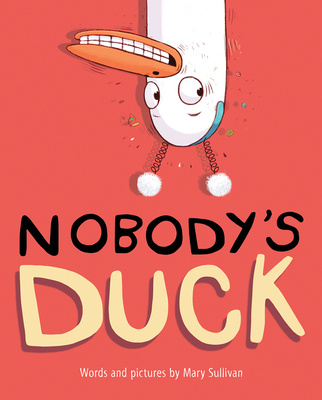 When a duck mysteriously arrives on an alligator’s lawn, they set off to discover just who the duck belongs to. From the library to skydiving, from exasperation to laughter, the two make an unexpected discovery about friendship.

Readers will delight in this odd couple’s wacky adventures that feature the signature wit and ingenuity of Geisel Honor winner Mary Sullivan. Like its predecessors Ball, Treat, and Frankie, Nobody’s Duck has humor and heart in spades (and quacks).

"The text—consisting entirely of cartoon-style dialogue bubbles—is minimal, allowing the illustrations to tell the story and provide the humor, while also making this highly appropriate for beginning readers. Yes, friends can be found in unusual places, and there can be plenty of humor in the telling." - Booklist

...There is much to enjoy here as two different personalities (and species) form a new family." -Kirkus

"Sullivan’s broadly cartooned, all-dialogue story is an exquisitely constructed comedy, a twist on the unwelcome guest plot with not a single beat or visual joke out of place."--Publishers Weekly, STARRED review

"Sullivan’s all-dialogue, all speech-balloon text is maximally cunning in its ability to fold word and phrase repetition into the plot without ever straining the vocabulary."--BCCB

"Families will enjoy one-on-one time with the book."--School Library Journal

Mary Sullivan spent a great deal of time drawing in her formative years. Though she received a BFA from the University of Texas at Austin, she considers herself a self-trained illustrator. Ms. Sullivan has shown her work at galleries and coffees shops in Dallas and Austin. She channels her considerable creative energy  into projects for Highlights for Children, Scholastic, Innovative Kids, School Zone, Oxford Press U.K., Pearson and many more. Her first picture book for HMH, Ball, was a 2014 Geisel Honor Book. She lives in Cedar Park, Texas.
www.marysullivan.com
Twitter: @sullivandraws
Instagram: @sullivandraws