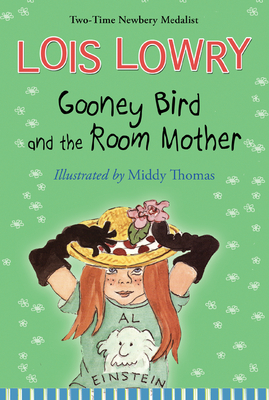 Gooney Bird Greene knows exactly where she likes to be: “right smack in the middle of everything.” Sure enough, her colorful fashion sense, exuberant personality, and “absolutely true” stories land her at the center of attention most of the time, but as Mrs. Pidgeon’s second grade class prepares for their Thanksgiving pageant, the lead role of Squanto is still up for grabs. And so is the role of Room Mother, but with each of the children’s parents already overloaded, there are no volunteers to bring cupcakes to their play. So Gooney Bird promises to find one—in exchange for the lead. There’s just one catch: the person she convinces to be Room Mother insists on remaining incognito. As the class struggles to decorate the mural, make costumes, and learn their songs for the play, the suspense builds: will the pageant be a success? And who is their mysterious Room Mother?

Two-time Newbery Award–winning author Lois Lowry has once again captured the eager energy of an elementary school classroom and the hilarious antics and anecdotes of its students, especially those of the irrepressible Gooney Bird Greene herself. In her second literary appearance, Gooney Bird is back with more “absolutely true” stories to tell, more tips for her fellow aspiring storytellers, and a few challenging vocabulary words to share, too.

"Larger than life and with a heart as big as her personality, Gooney Bird Greene will elicit gales of laughter, along with sighs of appreciation, from Suzy Kline and Junie B. Jones fans—as well as their parents—in this second winning, tongue-in-cheek outing." —Kirkus Reviews, starred Kirkus Reviews, Starred

"This is a fast-paced read, with Thomas’s black-and-white drawings highlighting key moments. This sequel stands on its own, but readers may want to go back and learn how unique Gooney Bird Greene became a part of this classroom." School Library Journal

"The lively hero of the chapter book Gooney Bird Greene (2002) is back in her idyllic second-grade classroom, as the children get ready to celebrate a pageant of the First Thanksgiving." --Booklist Booklist, ALA

Middy Thomas is a native Mainer. She loves all forms of art and works in all mediums, from painting to printing to sculpture. Ms. Thomas also teaches two art classes a week in her studio.
Loading...
or support indie stores by buying on