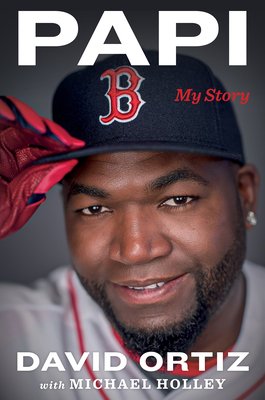 An entertaining, unfiltered memoir by one of the game’s greatest, most clutch sluggers and beloved personalities

David “Big Papi” Ortiz is a baseball icon and one of the most popular figures ever to play the game.  As a key part of the Boston Red Sox for 14 years, David has helped the team win 3 World Series, bringing back a storied franchise from “never wins” to “always wins.” He helped them upend the doubts, the naysayers, the nonbelievers and captured the imagination of millions of fans along the way, as he launched balls into the stands again, and again, and again.  He made Boston and the Red Sox his home, his place of work, and his legacy. As he put it: This is our f*&#ing city.

Now, looking back at the end of his legendary career, Ortiz opens up fully for the first time about his last two decades in the game. Unhindered by political correctness, Ortiz talks colorfully about his journey, from his poor upbringing in the Dominican Republic to when the expansion Florida Marlins passed up a chance to sign him due to what was essentially tennis elbow. He recalls his days in Peoria, Arizona, his first time in the United States; tense exchanges with Twins manager Tom Kelly in Minnesota; and his arrival in Boston. Readers go behind the scenes for the many milestones of his Red Sox career— from the huge disappointment of the Red Sox losing to the Yankees in 2003, ending the curse in 2004 with the infamous “band of idiots," including his extraordinary clutch hitting to overcome a 3-0 series deficit against the Yankees, to earning a second title in 2007 and a third in 2013.  Along the way, he was tainted by the infamous banned substances list in 2009; he used his passion and place to fortify a city devastated by the Boston Marathon bombings; and he dominated pitchers right up through his retirement season at age 40.  Papi, as he became so affectionately called, gave his fans big hits when they needed them most. He was an even bigger presence:  He was a champion who rallied a team, a city, and a sport in a way that no one will ever forget.

In Papi, his ultimate memoir, Ortiz opens up as never before about his life in baseball and about the problems he sees in Major League Baseball, about former teammates, opponents, coaches, and executives, and about the weight of expectation whenever he stepped up to the plate. The result is a revelatory, fly-on-the wall story of a career by a player with a lot to say at the end of his time in the game, a game to which he gave so much and which gave so much to him.

Praise For Papi: My Story…

"[A] freewheeling, insider memoir . . . Now [Ortiz’s] many fans have a book in which the hitter looks back at his extraordinary run and what made it go.” -- Boston Globe

"The rise of Ortiz from scrap-heap bench player to Hall of Famer is an unlikely and entertaining story, and engagingly told in 'Papi: My Story' . . . As the unpolished reflections of one of the few ballplayers to redefine a club, it works perfectly . . .The memoir lives up to its 'no holds barred' billing."  -- Washington Post

"Baseball fans of all loyalties will enjoy learning about [Ortiz's] unique experiences in and out of the game." -- Library Journal

DAVID ORTIZ, nicknamed “Big Papi,” is a ten-time major league All-Star, three-time World Series champion, and the all-time MLB record holder for home runs, RBIs, and hits by a designated hitter. In 2015, Ortiz was voted as one of the four greatest players in Boston Red Sox history—along with Ted Williams, Carl Yastrzemski, and Pedro Martinez—by Red Sox fans. He lives in Boston, Massachusetts.

MICHAEL HOLLEY is the New York Times best-selling author of Patriot Reign, War Room, and Red Sox Rule. A former reporter and columnist for the Boston Globe and Chicago Tribune, Holley has also appeared on ESPN's popular show Around the Horn and on Fox Sports Net's I, MAX. He is currently a host of WEEI’s popular radio show Dale & Holley.
or
Not Currently Available for Direct Purchase