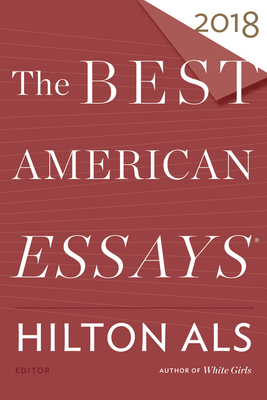 The Pulitzer–Prize winning and Guggenheim-honored Hilton Als curates the best essays from hundreds of magazines, journals, and websites, bringing “the fierce style of street reading and the formal tradition of critical inquiry, reads culture, race, and gender” (New York Times) to the task.

“The essay, like love, like life, is indefinable, but you know an essay when you see it, and you know a great one when you feel it, because it is concentrated life,” writes Hilton Als in his introduction. Expertly guided by Als’s instinct and intellect, The Best American Essays 2018 showcases great essays as well as irresistibly eclectic ones. Go undercover in North Korea, delve into the question of race in the novels of William Faulkner, hang out in the 1970s New York music scene, and take a family road trip cum art pilgrimage. These experiences and more immersive slices of concentrated life await.