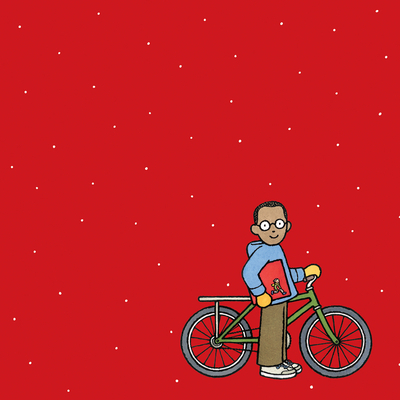 When a young boy discovers an abandoned book on the side of the road, it opens a window to another world just as real as his own. But what happens when the two worlds collide? This imaginative companion to the Caldecott Honor–winning The Red Book works in a continuous loop, showing us that stories never really end. While fans of the previous book will relish seeing the story play out, prior knowledge isn’t necessary in order to understand or savor this one.

Barbara Lehman has illustrated many books for children, including The Red Book, which was awarded the Caldecott Honor in 2005. Born in Chicago, Barbara attended Pratt Institute in Brooklyn, where she earned a BFA in communication design. A full-time illustrator, Barbara says, “Books and art have always held the strongest attraction for me. I have always felt drawn to ‘commercial art’ because of its ability to reach many people. I like the idea of being part of the media in a meaningful and thoughtful way, especially with children as the audience.” She lives in the Hudson Valley in upstate New York. Visit her website at www.barbaralehmanbooks.com.

★ "Lehman’s watercolor, gouache, and ink illustrations are clear, warm and inviting. Varying panel sizes and perspectives pace the story, drawing attention to the narrative’s subtle complexity. The almost-all-red cover echoes the characters’ own red books, affording readers an opportunity to ponder the story’s mystery and their potential connections to it." --The Horn Book, starred review

★ "This title stands alone but pairing it with the first work makes it all the more magical, particularly because the end brings the story into a breathtaking circle... Whether being explored for pleasure or for academic purposes, this title will add value to any library collection, especially ones that have copies of its predecessor." –School Library Journal, starred review

★ "Lehman gives readers the satisfaction of learning more about the original story while leaving them with more to ponder. Together, the two volumes form a pleasing and perplexing Möbius strip of a story." –Publishers Weekly, starred review

★ "... A twist ending that will blow many young minds (and some not-so-young ones, as well). " –Booklist, starred review

"A peaceful, wordless adventure that, as the final frames hint, will continue after it's closed." —Kirkus