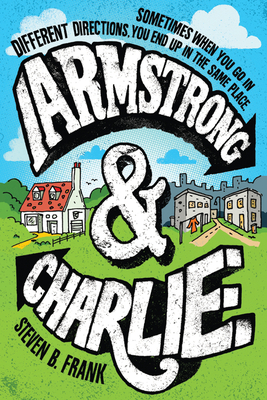 Charlie isn’t looking forward to sixth grade. If he starts sixth grade, chances are he’ll finish it. And when he does, he’ll grow older than the brother he recently lost. Armstrong isn’t looking forward to sixth grade, either. When his parents sign him up for Opportunity Busing to a white school in the Hollywood Hills, all he wants to know is "What time in the morning will my alarm clock have the opportunity to ring?"  When these two land at the same desk, it's the Rules Boy next to the Rebel, a boy who lost a brother elbow-to-elbow with a boy who longs for one.
From September to June, arms will wrestle, fists will fly, and bottles will spin.  There'll be Ho Hos spiked with hot sauce, sleepovers, boy talk about girls, and a little guidance from the stars.
Set in Los Angeles in the 1970s, Armstrong and Charlie is the hilarious, heartwarming tale of two boys from opposite worlds, Different, yet the same.

Praise For Armstrong and Charlie…

"Armstrong and Charlie are endearing and layered protagonists worth cheering for." – Horn Book

will have readers cheering." –Bulletin

"This uplifting and touching exploration of friendship, with a vivid setting, is a solid addition to most middle school libraries." –School Library Journal

Armstrong and Charlie is one of those distinctly American books that speaks to us of who we are.  It warns us of those forces that divide us, and celebrates the strength of those who can overcome them.  Armstrong and Charlie are real kids, and their friendship is a real friendship, and their conflicts are real, and their courageous solutions are real as well.  This novel is an exultation of hope--and a dang good story to boot.  – Gary Schmidt, Newbery Honor-winning author of The Wednesday Wars and Okay for Now

"Frank imbues all of his main players—from Armstrong’s one-legged Korean War veteran father to Charlie’s mother,
who is mourning the death of her eldest son—with distinctive voices, giving emotional substance
to their triumphs and heartbreaks while never talking down to his audience."--Association of Jewish Libraries