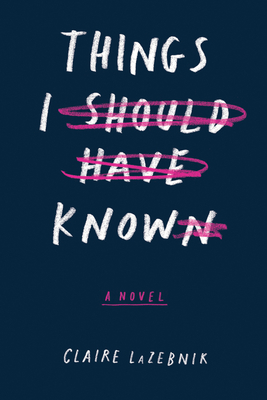 Things I Should Have Known (Hardcover)

Meet Chloe Mitchell, a popular Los Angeles girl who’s decided that her older sister, Ivy, who’s on the autism spectrum, could use a boyfriend. Chloe already has someone in mind: Ethan Fields, a sweet, movie-obsessed boy from Ivy’s special needs class.

Chloe would like to ignore Ethan’s brother, David, but she can’t—Ivy and Ethan aren’t comfortable going out on their own so Chloe and David have to tag along.  Soon Chloe, Ivy, David, and Ethan form a quirky and wholly lovable circle. And as the group bonds over frozen yogurt dates and movie nights, Chloe is forced to confront her own romantic choices—and the realization that it’s okay to be a different kind of normal.

Claire LaZebnik has written five novels for adults including Same As It Never Was (which was made into the ABC Family movie, Hello Sister, Goodbye Life), Knitting Under the Influence, and Families and Other Non-Returnable Gifts. Her young adult novels include Epic Fail, The Trouble with Flirting, The Last Best Kiss, and Wrong About the Guy (Harper Teen). She has also co-authored two books on autism; Overcoming Autism and Growing Up on the Spectrum. She has contributed to GQ, Self Magazine, the New York Times and the Wall Street Journal, among other publications, and to the anthology play Motherhood Out Loud. A graduate of Harvard University, she lives with her TV writer husband and four children, one of whom has autism. Visit her at clairelazebnik.com and on Twitter at @clairelazebnik.

Praise For Things I Should Have Known…


"This hilarious, sweet and romantic book reminds us that if we open our hearts, life offers up so many wonderful kinds of normal."
—Justine Magazine

"There’s just something about [LaZebnik's] writing that keeps me coming back. Her characters have fully realized lives; she strikes a great balance in her stories between the romantic and the familial... [LaZebnik] explores particularly complicated sibling relationships here, and does so in a way you can feel, in equal parts, the devotion and frustration leaping off the page."
—Forever Young Adult

"More a love story about sisterhood than romantic, it's a story that will illuminate what it's like to live an ordinary teenage life when you have autism.”
—Bustle

"We highly recommend Things I Should Have Known...a thought-provoking portrayal of autism and the people it touches."
—HelloGiggles

"LaZebnik hits it out of the park with her story about pretty, popular Chloe and her loving relationship with her older, autistic sister, Ivy... With perceptiveness and ample skill, LaZebnik paints a vivid picture of what the sibling of a person with high-functioning autism might go through. Never resorting to stereotype, she depicts appealing, three-­dimensional characters who flesh out a narrative that is compassionate, tender, funny, and wise all at once. This insightful, well-­written story will entertain readers while inspiring meaningful empathy."
—Booklist, starred review

"Readers with special needs siblings are the natural audience for this, but the wit holds broad appeal, and the mostly nonjudgmental insights will certainly give readers a new perspective on young adults on the spectrum and those who love, protect, and advocate for them."
—Bulletin

“In this insightful account of misconceptions, family conflict, and the ironies of love, LaZebnik (Wrong About the Guy) examines the evolution of several relationships. . . . Writing with honesty and wit, LaZebnik offers a thought-provoking portrayal of how people can come together despite, or perhaps because of, their differences.”
—Publishers Weekly

"An eye-opening look at autism and those it touches."
—Kirkus

"This story about a girl who upends her own life by trying to help someone else is a winning read for young people ready for a realistic romance about life’s challenges."
—School Library Journal

"Characterization here is spot on, as LaZebnik ably depicts the speech patterns and behaviors characteristic of people on the spectrum as well as very different versions of sibling, parental, and stepparental response… Readers with special needs siblings are the natural audience for this, but the wit holds broad appeal, and [the book] will certainly give readers a new perspective on young adults on the spectrum and those who love, protect, and advocate for them."
—The Bulletin of the Center for Children's Books

“A charmingly honest, insightful story about love, family, and frozen yogurt. So good you'll finish it in one sitting!”
—Robyn Schneider, author of The Beginning of Everything and Extraordinary Means

“Things I Should Have Known is funny, compassionate, and loving. LaZebnik writes with authority and ease, capturing the complexities of sibling bonds and first love, and crafting characters to root for from start to finish.”
—Emma Mills, author of First & Then

"At once romantic and touching, perceptive and honest, Things I Should Have Known is about first love, the bonds of sisterhood, and living your most authentic life. I couldn’t put it down."
—Julie Buxbaum, author of Tell Me Three Things

“A fiercely honest and surprising story about family, first love, and the beauty of individuality. LaZebnik reminds us that sometimes the most wonderful things in life are the things you never expected.”
—Ashley Blake, author of Suffer Love