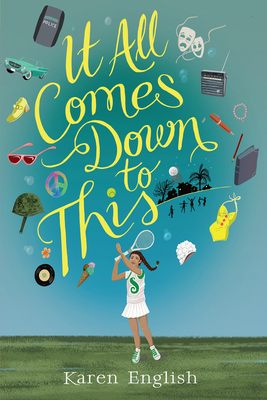 It All Comes Down to This

It’s 1965, Los Angeles. All twelve-year-old Sophie wants to do is write her book, star in the community play, and hang out with her friend Jennifer. But she’s the new black kid in a nearly all-white neighborhood; her beloved sister, Lily, is going away to college soon; and her parents’ marriage is rocky. There’s also her family’s new, disapproving housekeeper to deal with. When riots erupt in nearby Watts and a friend is unfairly arrested, Sophie learns that life—and her own place in it—is even more complicated than she’d once thought.
Leavened with gentle humor, this story is perfect for fans of Rita Williams-Garcia.


Praise For It All Comes Down to This…

? "A satisfying combination of historical and realistic fiction featuring an interesting and diverse cast." —SLJ, starred review   ? "Thoughtful and well-wrought, this novel is compassionate, pointed, and empowering." —Booklist, starred review   ? "Most of all, this is an impressive coming-of-age story whose fully realized protagonist is surrounded by a rich supporting cast. Cultural details artfully evoke the tenor and tone of the times." —Kirkus, starred review   ? "Expressing subtle and blatant bigotries alike, English (the Carver Chronicles series) movingly reveals how an impressionable and intelligent child learns from the injustices that touch her, her family, and her friends." —PW, starred review   "Ms. English has a light touch, and she captures human idiosyncrasy in an honest, witty way that makes her characters relatable, whatever their color or pallor. Unfairness and race-consciousness run through the story—so do surprises. Bigotry wears many guises. Kindness does too." —Wall Street Journal   ". . . a true coming-of-age story. The perspective of an upper-middle-class African American family is an unusual and welcome one; and Sophie’s interactions with her white best friend make for a particularly honest dialogue. Fans of Rita Williams-Garcia will enjoy this moving, frank novel." —Horn Book   ". . . [It All Comes Down to This] will capture readers at every point, bringing a nuanced understanding to the history of American civil rights that is sometimes flattened in the classroom curriculum." —Bulletin —

Karen English is a Coretta Scott King Honor Award-winner and the author of It All Comes Down to This, a Kirkus Prize Finalist, as well as the Nikki and Deja and The Carver Chronicles series. Her novels have been praised for their accessible writing, authentic characters, and satisfying storylines. She is a former elementary school teacher and lives in Los Angeles, California.