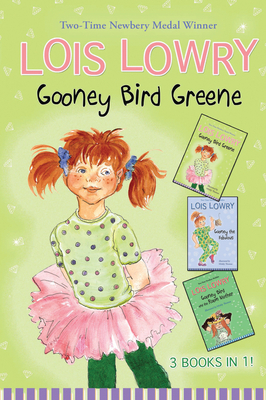 From the moment Gooney Bird makes her grand entrance at the Watertower Elementary School, her fellow second-graders are immediately intrigued. After all, it’s not every day that a new student shows up to Mrs. Pidgeon’s classroom wearing pajamas and cowboy books! Her colorful fashion sense, exuberant personality, and “absolutely true” stories land her at the center of attention most of the time.

Join Gooney Bird as she greets every new challenge with excitement, aplomb, and a plethora of vocabulary words in this delightfully funny three-book collection.

Praise for Gooney Bird Greene:
“Lowry’s masterful writing style reaches directly into her audience, managing both to appeal to young listeners and to engage readers.”— The Bulletin of the Center for Children’s Books

“…irrepressible Gooney Bird is that rare bird in children’s fiction: one that instantly becomes an amusing and popular favorite.” Kirkus Reviews


Praise for Gooney Bird and the Room Mother:
"Larger than life and with a heart as big as her personality, Gooney Bird Greene will elicit gales of laughter, along with sighs of appreciation, from Suzy Kline and Junie B. Jones fans—as well as their parents—in this second winning, tongue-in-cheek outing." —Kirkus Reviews, starred Kirkus Reviews, Starred

"This is a fast-paced read, with Thomas’s black-and-white drawings highlighting key moments. This sequel stands on its own, but readers may want to go back and learn how unique Gooney Bird Greene became a part of this classroom." School Library Journal

"The lively hero of the chapter book Gooney Bird Greene (2002) is back in her idyllic second-grade classroom, as the children get ready to celebrate a pageant of the First Thanksgiving." --Booklist Booklist, ALA

Praise for Gooney the Fabulous:
"[Gooney's] eccentric outfits and words of wisdom are peppered throughout to keep the story moving along while Thomas's characteristic black-and-white illustrations provide nice visuals. Full of new vocabulary words and information about fables . . . a must for Gooney Bird fans."--School Library Journal

"Lowry nicely individualizes her characters and gets readers interested in their problems."--Booklist, ALA

"If Aesop met Gooney Bird Greene, what would result? Fabulous fables, of course. . . . Gooney's outlandish outfits, take-charge (even bossy) attitude and boisterous spirit continue to be humorously likable--and fabulous. No doubt there'll be a fourth; meanwhile, this one offers a clever writing exercise for a class."--Kirkus Reviews