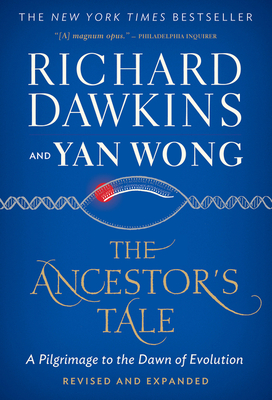 A Pilgrimage to the Dawn of Evolution

The renowned biologist and thinker Richard Dawkins presents his most expansive work yet: a comprehensive look at evolution, ranging from the latest developments in the field to his own provocative views. Loosely based on the form of Chaucer's Canterbury Tales, Dawkins's Tale takes us modern humans back through four billion years of life on our planet. As the pilgrimage progresses, we join with other organisms at the forty "rendezvous points" where we find a common ancestor. The band of pilgrims swells into a vast crowd as we join first with other primates, then with other mammals, and so on back to the first primordial organism.
Dawkins's brilliant, inventive approach allows us to view the connections between ourselves and all other life in a bracingly novel way. It also lets him shed bright new light on the most compelling aspects of evolutionary history and theory: sexual selection, speciation, convergent evolution, extinction, genetics, plate tectonics, geographical dispersal, and more. The Ancestor's Tale is at once a far-reaching survey of the latest, best thinking on biology and a fascinating history of life on Earth. Here Dawkins shows us how remarkable we are, how astonishing our history, and how intimate our relationship with the rest of the living world.

Praise For The Ancestor's Tale: A Pilgrimage to the Dawn of Evolution…

"This clever approach to our extended family tree should prove a natural hit with science readers." —Publishers Weekly, starred

"This is an ambitious, important book rich with fascinating insights. Also, it couldn't come at a better time."—Carl Zimmer, The New York Times Book Review

"The most modest and winning of his eight books."—John Horgan, Discover

RICHARD DAWKINS is an emeritus fellow of New College, Oxford and was the University of Oxford's Professor for Public Understanding of Science from 1995 until 2008. He is the author of 15 books includingUnweaving the Rainbow, A Devil’s Chaplain, and The God Delusion.Dawkins lives in Oxford.,


DR. YAN WONG is an evolutionary biologist who studies the theoretical underpinnings of life. His DPhil involved modeling the evolutionary effects of self-recognition systems in plants, which was followed by a number of years at the Oxford Museum of Natural History, where he first worked with the renowned biologist, Richard Dawkins. In 2009, following a lectureship in evolutionary biology and ecology at the University of Leeds, Yan became a presenter on BBC1's prime-time series "Bang Goes The Theory", which demonstrates a wide and eclectic range of scientific ideas to the public at large. He also has a regular slot answering questions on the popular Radio 4 series 'More Or Less' and is a contributor to Bacon’s Theory on Radio 5 Live.
Loading...
or support indie stores by buying on