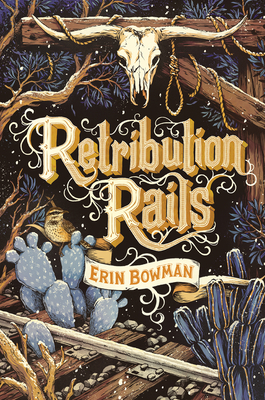 REDEMPTION IS NEVER FREE
When Reece Murphy is forcibly dragged into the Rose Riders gang  because of a mysterious gold coin in his possession, he vows to find the man who gave him the piece and turn him over to the gang in exchange for freedom. Never does he expect a lead to come from an aspiring female journalist. But when Reece's path crosses with Charlotte Vaughn after a botched train robbery and she mentions a promising rumor about a gunslinger from Prescott, it becomes apparent that she will be his ticket to freedom—or a noose. As the two manipulate each other for their own ends, past secrets are unearthed, reviving a decade-old quest for revenge that may be impossible to settle.

In this thrilling companion to Vengeance Road, dangerous alliances are formed, old friends meet new enemies, and the West is wilder than ever.

"Twisting, thrilling, and a wild ride from start to finish. Prepare to be hooked.” —Mackenzi Lee, New York Times bestselling author of the Gentleman's Guide to Vice and Virtue   "I devoured this thrilling, fast-paced battle, from its setting in the American West to its cast of vivid characters. “ –Tamora Pierce, New York Times bestselling author     "Rugged and ruthless, Retribution Rails brings readers into the expanding—and lawless—Wild West." –Mindy McGinnis, author of Not a Drop to Drink   "Erin Bowman has woven a world as convincing as it is gripping. I flew through these pages with abandon, and I’m certain many readers will find themselves doing the same.” - Ryan Graudin, author of the Wolf By Wolf duology   "[E]ntertaining." –Kirkus   "Bowman's attention to period details, sexism, and racism flesh out the fast-paced plot in a most satisfying way." –Booklist   "...For die-hard readers of the Western genre." –School Library Journal     —

Erin Bowman is the critically acclaimed author of numerous books for children and teens, including the Taken Trilogy, Vengeance Road, Retribution Rails, the Edgar Award-nominated Contagion duology, The Girl and the Witch’s Garden, and the forthcoming Dustborn. A web designer turned author, Erin has always been invested in telling stories–both visually and with words. Erin lives in New Hampshire with her husband and children.
Loading...
or
Not Currently Available for Direct Purchase