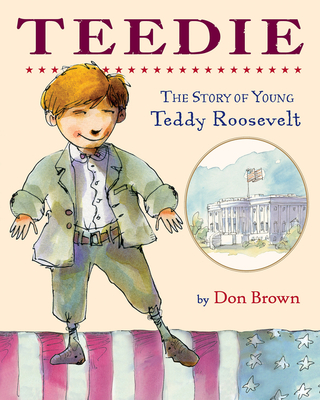 The Story of Young Teddy Roosevelt

Teedie was not exactly the stuff of greatness: he was small for his size. Delicate. Nervous. Timid. By the time he was ten years old, he had a frail body and weak eyes. He was deviled by asthma, tormented by bullies. His favorite place to be was at home. Some might think that because of these things, Teedie was destined for a ho-hum life. But they would be wrong. For Teedie had a strong mind, as well as endless curiosity and determination. Is that all? No. Teedie also had ideas of his own--lots of them. It wasn't long before the world knew him as Theodore Roosevelt, the youngest president of the United States.

Praise For Teedie: The Story of Young Teddy Roosevelt…

"Brown’s characteristically vigorous scrawls capture both the scrawny boy and the bulldog of a man, infusing his vignettes with a sizable helping of wit. All in all, this is a spot-on introductory book for lower grades."--Kirkus Reviews

"Line and wash illustrations add movement and a playful tone to the serious text, which generously incorporates quotes from Roosevelt . . . An author’s note concludes this brief overview and may well encourage youngsters to learn more about this fascinating figure."--School Library Journal, starred review
". . . vignettes of scratchy pen-work that capture humor and drama with equal ease—and shows Teddy’s progression from a wispy twig into a big stick . . . a more kid-friendly hook in the young man whose determination trumped his boyhood shortcomings."--Booklist
"Brown’s signature watercolors follow the text and, on the final page, provide a potent instructional summation as President Theodore Roosevelt stands at the bully pulpit while a hand-lettered text proclaims his accomplishments."--Horn Book