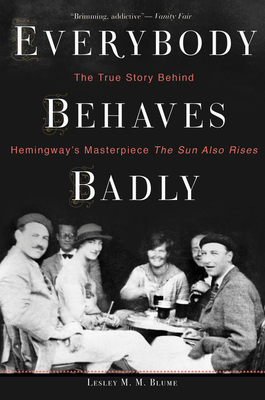 The True Story Behind Hemingway's Masterpiece The Sun Also Rises

“Brimming, addictive . . . In Everybody Behaves Badly, the party has just begun and the taste of fame is still ripe . . . The Lost Generation [is] restored to reckless youth in living black and white.” — James Wolcott, Vanity Fair

“An essential book . . . a page-turner. Blume combines the best aspects of critic, biographer and storyteller . . . and puts the results together with the skill of an accomplished novelist. [This is] a complicated story, told masterfully.” — Minneapolis Star Tribune

In the summer of 1925, Ernest Hemingway traveled to Pamplona for the infamous running of the bulls. He then channeled that trip’s drunken brawls, sexual rivalry, midnight betrayals, and midday hangovers into a novel that redefined modern literature. Lesley Blume tells the full story behind Hemingway’s legendary rise for the first time, revealing how he created his own image as the bull-fighting aficionado, hard-drinking literary genius, and expatriate bon vivant. In all its youth, lust, and rivalry, the Lost Generation is illuminated here as never before.

“Engrossing . . . Drawing on journals, letters, and autobiographies of many members of the artistic circles in which Hemingway moved in the early 1920s, Blume shows how ruthlessly Hemingway betrayed his mentors, skewered his friends in his fiction, and sought to advance his career at all costs.” — Boston Globe

Praise For Everybody Behaves Badly: The True Story Behind Hemingway's Masterpiece The Sun Also Rises…

A New York Times Bestseller  A Washington Post Notable Book of 2016?   "The story behind Hemingway's The Sun Also Rises is totally captivating, smartly written, and provocative." —Glamour   "Meticulously document[ed] ... pacily written ... Ms. Blume has drawn deeply upon many sources, particularly Hemingway’s own correspondence, to deftly portray the cast of lost characters, their thin-skinned vanities and their quarrelsome insecurities." —The Wall Street Journal   "Fiendishly readable ... a deeply, almost obsessively researched biography of a book, supported by a set of superb endnotes worth reading in their own right." —Washington Post   "Masterfully told ... “Everybody Behaves Badly” is deeply evocative and perceptive, and every page has a Hemingway-like ring of unvarnished truth." —Christian Science Monitor   "[A] must-read ... In Lesley M.M. Blume's latest release, escape to the real-life world of Hemingway's groundbreaking piece of modern literature, The Sun Also Rises. The boozy, rowdy nights in Paris, the absurdities at Pamplona's Running of the Bulls and the hungover brunches of the true Lost Generation come to life in this intimate look at the lives of the author's expatriate comrades." —Harper's Bazaar   "[An] impeccably researched and resonant account of the true story behind The Sun Also Rises ... Everybody Behaves Badly breaks ground by stressing how important The Sun Also Rises was in bringing modernist literature to a commercial audience and, especially, the part Fitzgerald played in helping to encourage Hemingway and shape his manuscript." —The Financial Times   “Without sounding unduly disapproving or moralistic, Blume gives us a portrait of the artist as a young opportunist … [an] excellent book.” —The Times Literary Supplement   “My favorite book of 2016 ... a fascinating recreation of one of the most mythic periods in American literature—the one set in Paris in the ’20s—and about the writers and artists who were drawn there: Hemingway’s friends, mentors, lovers, and enemies. Everyone behaved badly indeed, Hemingway worst of all, which is one reason it’s hard to stop reading.” —Jay McInerney   "As meticulous a history of the early 20th Century as it is a true drama-fueled page-turner starring characters like F. Scott Fitzgerald, Everybody Behaves Badly ticks both beach read and academic columns." —Tory Burch Daily   "A spirited account of a spirited age, when writers saw an opportunity to change the culture ... Blume presents a sharp portrait of a young nobody desperately, sometimes maliciously, trying to become a great — if not thegreat — writer of his time.  Despite the wobbly tower of books about Hemingway, it seems we can’t keep from returning to him, and writers like Blume make it worth our while." —Los Angeles Review of Books   "Thick with juicy details...[with] a fascinating epilogue ... Blume writes that the outline alone for her book ran to 1,400 pages. And every page of that labor is visible." —Dallas Morning News   “[A] vivid character- and fact-filled book … One of the distinguishing features of Everybody Behaves Badly is just how crammed with anecdotes and

LESLEY M. M. BLUME is an award-winning journalist, author, and cultural historian. She contributes regularly to Vanity Fair, and her work has appeared in many other publications, including the New York Times, The Wall Street Journal, Vogue, Town & Country, and The Paris Review Daily. She is a New Yorker currently based in Los Angeles.