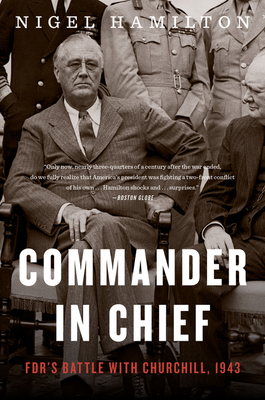 1943 was the year of Allied military counteroffensives, beating back the forces of the Axis powers in North Africa and the Pacific—the “Hinge of Fate,” as Winston Churchill called it. In Commander in Chief Nigel Hamilton reveals FDR’s true role in this saga: overruling his own Joint Chiefs of Staff, ordering American airmen on an ambush of the Japanese navy’s Admiral Yamamoto, facing down Churchill when he attempted to abandon Allied D-day strategy (twice). This FDR is profoundly different from the one Churchill later painted. President Roosevelt’s patience was tested to the limit quelling the Prime Minister’s “revolt,” as Churchill pressured Congress and senior American leaders to focus Allied energy on disastrous fighting in Italy and the Aegean instead of landings in Normandy. Finally, in a dramatic showdown at Hyde Park, FDR had to stop Churchill from losing the war by making the ultimate threat, setting the Allies on their course to final victory.

In Commander in Chief, Hamilton masterfully chronicles the clash of nations—and of two titanic personalities—at a crucial moment in modern history.

“The rebuttal to the Churchill multivolume history . . . The war retains its power to shock and surprise.” — Boston Globe

NIGEL HAMILTON is a best-selling and award-winning biographer of President John F. Kennedy, General Bernard “Monty” Montgomery, and President Bill Clinton, among other subjects. His most recent book, The Mantle of Command: FDR at War, 1941–1942, was long-listed for the National Book Award. He is a senior fellow at the McCormack Graduate School, University of Massachusetts, Boston, and splits his time between Boston, Massachusetts, and New Orleans, Louisiana.
Loading...
or support indie stores by buying on