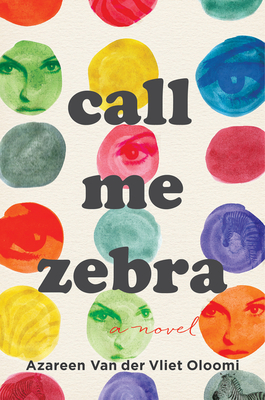 Widely praised and winner of the PEN/Faulkner Award for Fiction among other mentions, Call Me Zebra follows a feisty heroine's idiosyncratic quest to reclaim her past by mining the wisdom of her literary icons — even as she navigates the murkier myseteries of love.

Zebra is the last in a line of anarchists, atheists, and autodidacts. Alone and in exile, she leaves New York for Barcelona, retracing the journey she and her father made from Iran to the United States years ago.

Books are her only companions—until she meets Ludo. Their connection is magnetic, and fraught. They push and pull across the Mediterranean, wondering if their love—or lust—can free Zebra from her past.

Starring a heroine as quirky as Don Quixote, as brilliant as Virginia Woolf, as worldly as Miranda July, and as spirited as Lady Bird, Call Me Zebra is “hilarious and poignant, painting a magnetic portrait of a young woman you can’t help but want to know more about” (Harper’s Bazaar).

Praise For Call Me Zebra…

Praise for Call Me Zebra Winner of the PEN/Faulkner Award for Fiction Longlisted for the PEN/Open Book Award  An Amazon Best Book of the Year  A Publishers Weekly Bestseller   Named a Best Book by: Entertainment Weekly, Harper's Bazaar, Boston Globe, Fodor's, Fast Company, Refinery29,Nylon, Book Riot, The Millions, Electric Literature, Bitch, Hello Giggles, Literary Hub, Shondaland, Bustle, Vol. 1 Brooklyn,Read It Forward,Entropy Magazine,Chicago Review of Books, iBooks and Publishers Weekly   "Ferociously intelligent...With intricacy and humor, Van der Vliet Oloomi relays Zebra's brainy, benighted struggles as a tragicomic picaresque whose fervid logic and cerebral whimsy recall the work of Bolaño and Borges.”—The New York Times Book Review  "Once in a while a singular, adventurous and intellectually humorous voice appears that takes us on an inescapable journey. Azareen Van der Vliet Oloomi’s Call Me Zebra is a library within a library, a Borges-esque labyrinth of references from all cultures and all walks of life. In today’s visual Netflix world, Ms. Van der Vliet Oloomi’s novel performs at the highest of levels in accomplishing only what the written novel can show us.” —PEN/Faulkner Award for Fiction citation, from judges Joy Williams, Percival Everett, and Ernesto Quiñonez   "Splendidly eccentric...Hearken ye fellow misfits, migrants, outcasts, squint-eyed bibliophiles, library-haunters and book stall-stalkers: Here is a novel for you.” —Wall Street Journal   "If you don’t know this name yet, you should: Van der Vliet Oloomi, a National Book Award '5 Under 35' honoree, returns with this absurdist, unwieldy, and bracingly intelligent story." —Entertainment Weekly   "A sexy, complicated affair...geopolitically savvy." —Elle   "In a story that might otherwise be self-serious, Van der Vliet Oloomi resists the standard redemption arc, infusing her protagonist with a darkly comic neuroticism."—The New Yorker   "An offbeat, deadpan funny account of the travels of a young Iranian woman." —Washington Post  "Acerbic wit and a love of literature color this picaresque novel...By turns, hilarious and poignant, painting a magnetic portrait of a young woman you can't help but want to know more about." —Harper's Bazaar   "Hop on board with anarchist, atheist, and autodidact Zebra as she bounds on her hilarious and frenetic adventure through literature and across the globe, always in search of deeper connection." —Fodor's   "Not many authors are compared to Borges, Cervantes, and Kathy Acker all in one breath, but that is exactly what we're dealing with here: Azareen Van der Vliet Oloomi is a twisted, twisty genius, whose latest novel is a wild, trippy ride across countries…[Zebra] is in possession of an inimitable…voice, but it’s all the better to help her—and us—navigate the chaos of this collapsing world." —Nylon   “What Maggie Nelson’s The Argonauts did for gender and sexuality, Call Me Zebra —