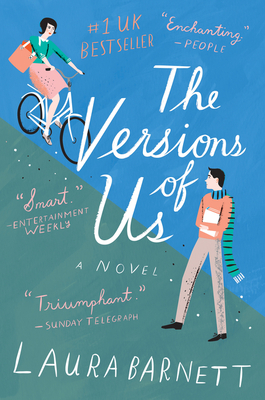 The Versions Of Us

“This is a lovely debut that swept me along with the story of two people destined to be together after one chance meeting in college. From there, Bennett presents three different versions of their story, and readers see the next decades played out through the couple's eyes. Each story is different, yet features the same players, and each does not turn out as expected. This is a thoughtful and touching novel about love, expectations, and forgiveness.”
— Kelly Estep (E), Carmichael's Bookstore, Louisville, KY
View the List

A #1 UK bestseller, The Versions of Us is a dazzling novel about the ways the smallest decisions give shape to our lives, charting a single relationship through three possible futures.


What if you had said yes? Some moments can change your life forever. Have you ever wondered, what if . . .?

A man is walking down a country lane. A woman, cycling toward him, swerves to avoid a dog. On that moment, their future hinges. There are three possible outcomes, three small decisions that could determine the rest of their life.

Eva and Jim are nineteen and students at Cambridge when their paths first cross in 1958. And then there is David, Eva's then-lover, an ambitious actor who loves Eva deeply. The Versions of Us follows the three different courses their lives could take following this first meeting. Lives filled with love, betrayal, ambition—but through it all is a deep connection that endures whatever fate might throw at them.

The Versions of Us explores the idea that there are moments when our lives might have turned out differently, the tiny factors or decisions that could determine our fate, and the precarious nature of the foundations upon which we build our lives. It is also a story about the nature of love and how it grows, changes, and evolves as we go through the vagaries of life.

Praise For The Versions Of Us…

#1 UK Bestseller An Indie Next Pick, May 2016 A Publishers Marketplace Buzz Book 2016: Spring/ Summer One of the Observer’s New Faces of Fiction  Winner of the Richard and Judy Spring Book Club 2016 (UK)?     "Barnett's enchanting debut imagines three possible lives, three possible love stories—each with its unique joys and sorrows—demonstrating that life has no perfect path."—PEOPLE, "The Best New Books"   “Every love affair has an origin story, and the one that launches The Versions of Us is as picturesque as any: A pretty coed, late to class one blustery October afternoon, swerves to avoid the little terrier skittering into her path, and a chivalrous young man comes to the rescue. Her tire is flat, punctured by a rusty nail; their chemistry, electric and instantaneous, is not…Versions is smart enough to know that the fantasy of infinite possibility is thrilling—but not nearly as much as the reality of true human connection.”—ENTERTAINMENT WEEKLY   "A subtle meditation on the ways people change each other. Although the premise is romantic, Barnett explores romance in a realistic way, including obsession, insecurity, and sacrifice. Jim and Eva bring out the best and worst in each other, and their relationship(s) is a testament to the dark and light sides of romantic love...The choices we make under different circumstances are the real heart of the novel, as well as a sense that all paths are worth traveling."—CHICAGO REVIEW OF BOOKS   "British journalist Barnett’s debut novel imagines the delicious prospect of romantic do-overs, cleverly negotiating the tricky and often dizzying terrain of three versions of first love...Barnett’s evocative presentation is a masterly romantic study of love’s choices and consequences, leaving wide open just what constitutes a perfect ending."—PUBLISHERS WEEKLY, starred and boxed review   "Barnett masterfully pulls the reader through these alternating tales. Each option is compelling and believable. Perhaps there’s a lesson to be learned here: Regardless of the paths we choose, the people who are meant to be in our lives will find their way there."—BOOKPAGE   "An intriguing exploration of the many roads not taken."—BOOKLIST   "Fans of the novel One Day and the movie Sliding Doors will want to pick up this debut."—KIRKUS REVIEWS   "A rich, complex, and deeply satisfying novel… One of the most engrossing novels either of us has read in years."—Richard Madeley, THE RICHARD AND JUDY BOOK CLUB   "A triumphant debut… a thoughtful, measured book about the interplay of chance and destiny in our lives."—Elena Seymenliyska, SUNDAY TELEGRAPH   "Its very scope is a joy, the technical achievement seamlessly done, and the ending – all the endings – suitably affecting."—Jenny Colgan, THE GUARDIAN   "Well written, stunningly crafted and constantly surprising… An utterly convincing love story about two people destined to be together somehow, no matter what."—Kate Saunders, THE TIMES   "Barnett renders an irresistible concept in sweet, cool prose."—Hephzibah Anderson, THE OBSERVER   "Unique, complex and playful… Barnett suspends our disbelief like a conjuror."—Elizabeth Fremantle, SUNDAY EXPRESS   "An affecting and thought-provoking work, The Versions Of Us will keep you gripped until the tear-jerking conclusion." —

LAURA BARNETT is a writer, journalist, and theatre critic. She has been on staff at the Guardian and the Daily Telegraph, and is now a freelance arts journalist and features writer, working for the Guardian, the Observer, and Time Out London, as well as several other national newspapers and magazines. The Versions of Us is her first novel. She lives in London.
Loading...
or support indie stores by buying on