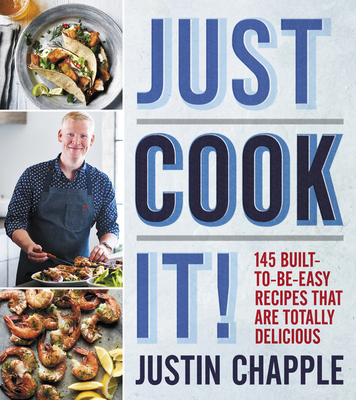 145 Built-to-Be-Easy Recipes That Are Totally Delicious

Justin Chapple may have trained at the French Culinary Institute, but he knows how people really cook at home. He grew up with a large family, first learning kitchen tricks from his grandmother who made do with whatever they had, and she made the food delicious. Now Justin is the host of Food & Wine’s award-nominated Mad Genius Tips video cooking series, and appears regularly on TODAY and other television shows as their resident kitchen hack expert. In his job as the Deputy Editor of the test kitchen, he’s often asked to take recipes from superstar chefs (think David Chang and Thomas Keller) and simplify them for home cooks. Now he is putting all of his expertise to good use in Just Cook It!, a collection of 145 mouthwatering recipes like Avocado Pizza with Dukka and Stovetop Mac-n-Cheese with Bacon Breadcrumbs, with Justin’s signature time-saving tips and hacks throughout.


Praise For Just Cook It!: 145 Built-to-Be-Easy Recipes That Are Totally Delicious…

“As someone who has been following Justin Chapple’s no-nonsense approach to cooking for years, I am beyond thrilled to own this collection of recipes! With this book, he has proven yet again that you can up your game in the kitchen while still keeping things simple and accessible.”
—Jesse Tyler Ferguson, actor

“Justin’s very personal book is filled with superb recipes, great writing, and a real window into techniques and tips that make cooking at home so much easier for anyone who loves food. Best of all, the title’s imperative is something we all need to hear more often. Recipes aren’t scary or hard at all; it’s only food, so Just Cook It!”
—Andrew Zimmern, The Pope of Food and Travel Television

“Justin brings an infectious joy to cooking like no one else. Being a Texan, you can win me with queso, and that’s just the start of the fun and warmth Justin shares with us. To Justin, we are all family, and the love inspired by his grandmother jumps off the pages into our tummies and hearts.”
—Tamron Hall, journalist and TV personality

“This is for all of us home cooks who want to up our game in the kitchen but still want a recipe that’s easy and foolproof and yet impressive. Justin’s done all the hard work for us, so we can have all the fun!”
—Valerie Bertinelli, actress and Food Network host

As the Deputy Test Kitchen Editor at FOOD & WINE, Chapple tests and develops hundreds of recipes a year for the magazine, digital projects and cookbooks. Justin also teaches wonderfully oddball kitchen hacks as the host of F&W’s video series Mad Genius Tips, for which he was nominated for a prestigious James Beard Award. In addition, Justin is the author of F&W’s cookbook, Mad Genius Tips: Over 90 Expert Hacks and 100 Delicious Recipes. Justin joined FOOD & WINE in 2010 as an Assistant Event Coordinator, helping produce the FOOD & WINE Classic in Aspen. Before joining FOOD & WINE, he graduated from the French Culinary Institute and worked under chef Alain Allegretti in New York City. Justin appears regularly on NBC’s Today Show.
or support indie stores by buying on
(This book is on backorder)