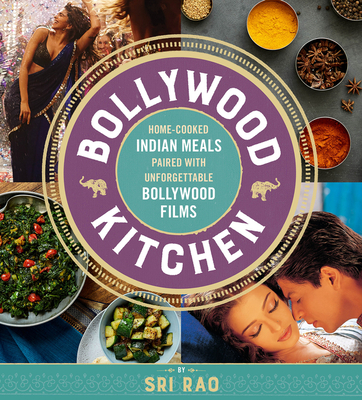 You’re invited to a party where the food and entertainment are both in Technicolor. It’s “dinner and a movie” in this vibrant, beautifully photographed tour of Indian food and films.

Indian cuisine and Indian cinema (known as Bollywood) share much in common – bold colors and flavors with plenty of drama. But to the uninitiated, they can seem dizzying. Let Sri Rao be your guide. As one of the only Americans working in Bollywood, Sri is an expert on Indian musical films, and as an avid cook, he’s taken his mom’s authentic, home-cooked recipes and adapted them for the modern, American kitchen.

The popularity of Indian food has grown immensely in recent years – and for good reason. It's perfectly suited for people who love bold flavors, as well as those looking for vegan, vegetarian, and gluten-free meals that don’t skimp on taste. But as Sri points out in Bollywood Kitchen – you’ve probably never tasted real Indian food. Home-cooked Indian-American food is surprisingly simple to make, using ingredients readily available in your local grocery store.

In this book you’ll find dinner menus and brunch menus, menus for kids and menus for cocktail parties. Along with each healthy and easy-to-prepare meal, Sri has paired one of his favorite Bollywood movies. Every one of these films is a musical, packed with dazzling song-and-dance numbers that are the hallmark of Bollywood, beloved by millions of fans all over the world. Sri will introduce each film to you, explaining why you’ll love it, and letting you in on some juicy morsels from behind the scenes.

Bollywood Kitchen is as much a beautiful coffee table book as it is a cookbook, filled with gorgeous film photographs and colorful tablescapes. It’s a unique treasure for Indian food lovers, as well as fans of world cinema.

"Rao has created more than a book of recipes. There is seldom a cookbook that voracious readers can flip through for story; this one feeds the eye and imagination. One can run their thumb and forefinger over technicolor pages featuring decadent film and food stills. The narrative also unearths the author: cheeky, perceptive, honest."—Edible Brooklyn

"In "Bollywood Kitchen," Rao gives new meaning to "dinner and a movie" by creating menus inspired by classic Indian films... It's a rare cookbook in which cinema history, especially one as rich as Bollywood, is presented in equal measure with recipes."—Houston Chronicle

"Full of humor and insight, Bollywood Kitchen makes a great read, even if neither Bollywood nor cooking are your passions. A delightful read not be wasted only on the coffee table."—News India Times

"Bollywood Kitchen is a must-have book for hardcore Hindi-film fans, but the movies featured offer a great introduction for any Bollywood newbies. The recipes themselves suit those new to cooking Indian dishes at home, although even those who prepare Indian food regularly will appreciate the meal-planning that Rao’s done. This really is a terrific book."
—Access Bollywood

“Readers expecting wildly complex preparations and nothing but showy musicals will be pleasantly surprised on both fronts, as Rao offers a refreshingly diverse set of movies as well as recipes…This is a thoughtful collection of films accompanied by unique but doable recipes that bridge the gap between American and Indian comfort food.”
—Publishers Weekly

SRI RAO is a writer-director-producer in New York City. He is uniquely positioned at the intersection of Hollywood & Bollywood, as one of the few Americans to have worked in the mainstream Indian film industry. Sri is an established TV screenwriter, having sold pilots to numerous networks including ABC, NBC, Fox, The CW, Bravo, BBC America, and Nickelodeon.