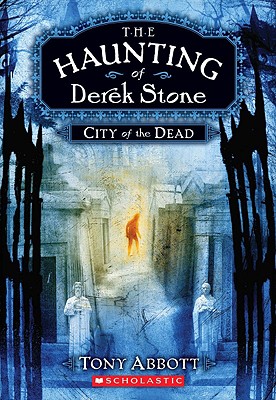 The Haunting of Derek Stone #1

City of the Dead

Could the road to the afterlife be a two-way street?

Derek Stone just turned fourteen. He's lived in the heart of New Orleans with his dad and older brother, Ronny, his whole life. He's a little overweight. He can't hear well out of his left ear.

Oh, and he's on the run from the dead.

Derek never imagined that the dead could be anything but dead. But there's no denying it. They're back -- and they're after him.

He just doesn't know why.

And he doesn't have long to figure it out.

Excerpt from CITY OF THE DEAD:

I'll tell you straight: the dead are coming back.

You won't believe it, of course. You'll say it's crazy. It's impossible. It's whatever.

Fine. I get it. Most of the time I don't believe it myself. But it's happening, and it affects all of us.

If you're smart, you'll listen and be afraid.

If you're really smart, you'll run.

And you'll do it now, because pretty soon there won't be anywhere to run to.

Tony Abbott is the author of more than ninety books for young readers, including THE SECRETS OF DROON series; middle-grade novel KRINGLE; and THE HAUNTING OF DEREK STONE series. He was the recipient of the 2006 Golden Kite Award, as well as the 2009 Edgar Award. Tony was born in Ohio, and now lives with his wife and two daughters in Trumbull, Connecticut. Visit him online at www.tonyabbottbooks.com.
Loading...
or
Not Currently Available for Direct Purchase