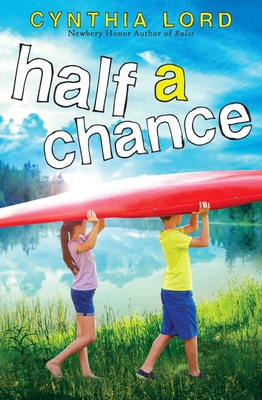 A moving new middle-grade novel from the Newbery Honor author of RULES.

When Lucy's family moves to an old house on a lake, Lucy tries to see her new home through her camera's lens, as her father has taught her -- he's a famous photographer, away on a shoot. Will her photos ever meet his high standards? When she discovers that he's judging a photo contest, Lucy decides to enter anonymously. She wants to find out if her eye for photography is really special -- or only good enough.

As she seeks out subjects for her photos, Lucy gets to know Nate, the boy next door. But slowly the camera reveals what Nate doesn't want to see: his grandmother's memory is slipping away, and with it much of what he cherishes about his summers on the lake. This summer, Nate will learn about the power of art to show truth. And Lucy will learn how beauty can change lives . . . including her own.

Praise For Half a Chance…

"Catherine is an endearing narrator who tells her story with both humor and heartbreak. . . . A lovely, warm read, and a great discussion starter." -- School Library Journal

"Realistic characters, humor, and a charming setting make this a great choice for collections of all sizes." -- Kirkus Reviews

Bulletin of the Center for Children's Books Starred Review
Twelve-year old Lucy Emery has just moved to a New Hampshire lakeside cottage, the latest target of her photojournalist father’s wanderlust. A work assignment soon takes him away for the summer, leaving Lucy and her mother to once again settle into a new home without him. Her own love of photography helps her channel her hurt over her father’s enthusiastic departure, and she decides to anonymously enter a photography competition he’s slated to judge, determined to win his approval through images that offer thought-provoking interpretations of the contest’s mandatory prompts. Luckily, she has help from her new friend, Nate, whose family summers at the neighboring house owned by his naturalist grandmother. When Lucy joins him on daily “Loon Patrol” kayak trips to track the hatching and growth of loon chicks, she discovers unexpected fodder for photographs and friendship and keenly feels how much she needs both. Lord offers a tender treatment of early adolescent needs and struggles in this thoughtful coming-of-age novel. The book sensitively depicts the complicated feelings and competing desires that afflict even ostensibly happy, middle-class families, understanding that things can be painfully amiss even when nothing big is wrong. With subtle but effective imagery (including the touching, recurring use of a loon call) and a relatable protagonist, the title speaks to both human loneliness generally and the plight of a young girl in need of friendship. Put this poignant and restrained novel in the hands of a preteen girl who has it all, or just seems to.

School Library Journal Starred Review
Twelve-year old Lucy and her parents have moved from an apartment in Boston to a lakeside cottage in New Hampshire, and her father, a prominent nature photographer, is immediately off to Arizona for a photo shoot. Her apprehension over fitting in at a new school is temporarily allayed when she is welcomed by Nate, whose family is spending the summer with his grandmother in the house next door. Kayaking, hiking, and loon-monitoring with Nate, Lucy chronicles their experiences using her own budding talent for photography. When she learns that his Grandma Lilah’s failing health is keeping her from observing her beloved loon family up close, she and Nate devise a plan to rent a motorized raft to take her out on the lake. Their plan, however, involves a deception–Lucy will use Nate’s name to enter a photo contest to be judged by her father. Newbery Honor winner Lord (Rules, Scholastic, 2006) has combined vivid, cinematic description with deft characterization and handles several important issues with sensitivity, nuance, and great skill. Lucy grapples with ambivalent feelings toward her self-centered father, rivalry in the face of new friendships, and an ethical dilemma in her decision to enter the contest and to use, against Nate’s will, a photo which captures his grandmother’s dementia. Readers will be absorbed in the well-paced plot, sympathize with the concerns of a likable protagonist, learn a bit about photography, and consider the impetus of using one’s creative talent for good or ill. A deeply enjoyable read.

Cynthia Lord is the award-winning author of RULES, a Newbery Honor and Schneider Family Book Award winner, as well as the critically acclaimed TOUCH BLUE. She made her picture book debut with HOT ROD HAMSTER, which won several awards including the Parents' Choice Award, and followed it with the beloved sequel HAPPY BIRTHDAY, HAMSTER. She lives in Maine with her family. Visit her at www.CynthiaLord.com.
Loading...
or
Not Currently Available for Direct Purchase