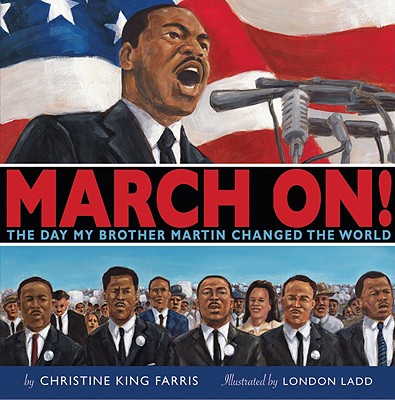 The Day My Brother Martin Changed the World

From Dr. Martin Luther King's sister, the definitive tribute to the man, the march, and the speech that changed a nation.

On a hot August day in 1963, hundreds of thousands of people made history when they marched into Washington, D.C., in search of equality. Martin Luther King, Jr., the younger brother of Christine King Farris, was one of them.

Martin was scheduled to speak to the crowds of people on that day. But before he could stand up and inspire a nation, he had to get down to business. He first had to figure out what to say and how to say it. So he spent all night working on his "I Have a Dream" speech, one that would underscore a landmark moment in civil rights history--the Great March on Washington. This would be one of the first events televised all over the globe. The world would be listening, as one of the greatest orators of our time shared his vision for a new day.

From the sister of Dr. Martin Luther King, Jr., comes this moving account of what that day was like for her, and for the man who inspired a crowd--and convinced a nation to let freedom ring.

London Ladd's beautiful full-color illustrations bring to life the thousands of people from all over the country who came to the nation's capital. They sing, they join hands, they march, and they listen as speaker after speaker inspires social change, culminating in Dr. King's "I Have a Dream" speech.

London Ladd graduated from Syracuse University. He and his wife live in Syracuse with their daughter. This is his first picture book. Illustrator of MARCH ON! The Day My Brother Martin Changed the World. In a starred review, Publishers Weekly said it best: "Ladd demonstrates a rare talent for portraiture--even the faces in his crowd scenes are individuated...He resists the temptation to lionize his subject: instead of looking iconic, his King looks human--in other words, capable of inspiring the reader." Please visit http: //blog.syracuse.com/video/cny_arts/
or
Not Currently Available for Direct Purchase
Copyright © 2020 American Booksellers Association