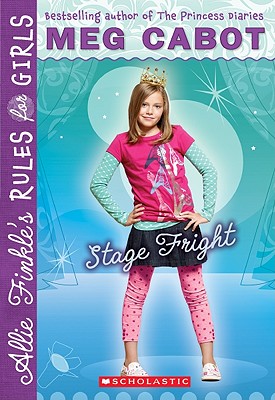 “Allie's back, with her wisdom-filled list of rules. This time, she uses her rules to navigate being the new kid at school. Will they give her the guidance she needs to outsmart the classroom bully? Or will she be saved by advice from an unlikely source? Readers will enjoy finding out.”
— Lisa Fabiano, Wellesley Booksmith, Wellesley, MA
View the List

Meg Cabot's youngest star is headed for the stage. . .at her school. For parent's night. But still, it's a starring role!

The fourth grade puts on a play written by Mrs. Hunter! Allie is sure she will walk away with the most coveted role--that of the princess, naturally-but one of her friends gets the part! What Allie doesn't realize is that the part she does get--that of the evil queen--is actually a better (and bigger) role. But Allie isn't content with just starring in the play. She goes full-on method and borrows some false eyelashes to wear for the play, which (what else is new?) causes a great deal of excited controversy. Allie learns it's not the size of the part, it's the size of the heart that matters.

What do you think about the opening line, “What’s amazing is how you can be a normal kid one day, and then something happens that completely changes your life,” of Allie Finkle’s Rules for Girls: Stage Fright? Does it grab your attention? Has your life ever changed overnight because of something that happened?

Allie’s mom lands a job on a TV show in town, Good News! Can you imagine if a member of your family became a TV regular? Would you show off or try to hide it?

If your class were going to put on a play like Allie’s does, what would you want the play to be? What role would you want to play: actor, lighting designer, set designer, director, producer, choreographer (if there is dancing), costume designer, or make-up artist?

Sophie and Allie both want the lead role in Princess Penelope in the Realm of Recycling. Although Allie doesn’t want to step on Sophie’s toes, she also doesn’t want to sell herself short. Would you try out for a lead part even if your best friend wanted it too?

What if your best friend got the part you wanted, like Sophie did with Allie’s part? Would you be supportive of your friend or would you need to distance yourself because of your disappointment?

Mrs. Hunter’s play is about doing your part to help save the environment. Do you recycle? Do you shut the lights when you leave the room or unplug your appliances when you’re not using them? What other kinds of things do you do to take care of the planet?

One of Allie’s rules is “It’s always better to have things out in the open than to let them fester.” Do you tend to keep something inside when it’s bothering you, or do you let it out?

What does the line “There are no small parts, only small actors” mean to you? How does it relate to what happened to Allie and her classmates?