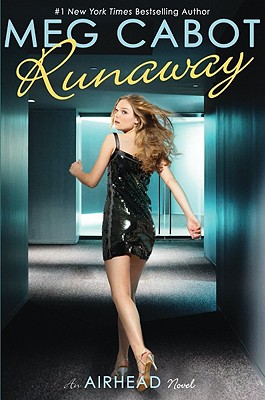 Where can you hide
When everyone knows your name?
The third and final book the NYT bestselling trilogy.
Emerson Watts is on the run: from school, from work, from her family, from her friends, from herself.
With everyone she loves furious with her for something she can't explain, and nothing but the live Stark Angel fashion show on New Year's Eve to look forward to, Em's reached the end of her rope. . .what's the point of even going on?
But when she discovers the truth about Nikki's secret, she knows there's only one person she can turn to.

bPraise for the Airhead Trilogy:/b
p
iNew York Times/i Bestseller
briPublishers Weekly/i Bestseller
p
*"[A] far-fetched but rousing roller-coaster ride of a novel . . . This book is sure to fly off the shelves." -iSchool Library Journal/i, starred review
p
"Bag the tiara and get out the gun . . . Cabot delivers." -iPublishers Weekly/i
p
"[The] strong, amusing voice, the plot twists, and the possibility of romance will draw mystery and chick-lit readers alike." -iBooklist/i
p
"Em's witty character keeps this read both grounded and fun." -iKirkus Reviews/i

Meg Cabot's many series and books for adults, teens, and tweens have included multiple #1 New York Times bestsellers and have sold more than twenty-five million copies worldwide. Her Princess Diaries series has been published in more than thirty-eight countries and was made into two hit films by Disney. Meg also wrote the New York Times bestselling Mediator, Airhead, Insatiable, and Allie Finkle's Rules for Girls series, as well as the award-winning novels All-American Girl and Avalon High. Meg lives in Key West with her husband and their cat. Visit Meg online at www.megcabot.com.
Loading...
or support indie stores by buying on
(This book is on backorder)