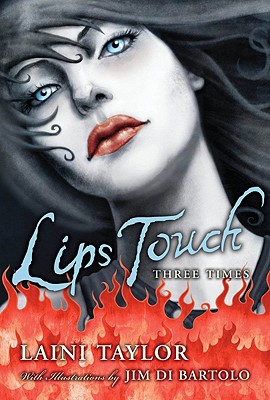 “In Lips Touch, temptation, lust, and love seep into each story, and it's easy to imagine yourself as one of the ordinary girls who are faced with extraordinary circumstances. This is a dark fantasy, one where the lines between truth and fiction blur and magic taints every breath.”
— Mandy King, The Boulder Book Store, Boulder, CO
View the List

Three tales of supernatural love, each pivoting on a kiss that is no mere kiss, but an action with profound consequences for the kissers' souls:

Goblin Fruit: In Victorian times, goblin men had only to offer young girls sumptuous fruits to tempt them to sell their souls. But what does it take to tempt today's savvy girls?

Spicy Little Curses: A demon and the ambassador to Hell tussle over the soul of a beautiful English girl in India. Matters become complicated when she falls in love and decides to test her curse.

Laini Taylor is the author of DAUGHTER OF SMOKE AND BONE. She is also the creator of the Laini’s Ladies line of gifts and stationery. Laini lives in Portland, Oregon, with her husband and her daughter.

Jim Di Bartolo is a mixed media illustrator, painter, and visual storyteller. In his freelance career he has illustrated novels, comic books, and role-playing games. He and his wife, the author Laini Taylor, have collaborated on several books, and their most recent joint effort, LIPS TOUCH: THREE TIMES, was a National Book Award finalist. He lives in Portland, Oregon, with his wife and their daughter, and can be found online at www.jimdibartolo.com. Chances are, he probably could use more sleep.

"Taylor offers a powerful trio of tales, each founded upon the consequences of a kiss…Even nonfantasy lovers will find themselves absorbed by Taylor's masterful, elegant work." -- Publishers Weekly, starred review

"[D]electable language . . . In the midst of these goblins, fiery gods and demons, Taylor reminds readers what makes them human. Holly Black and Melissa Marr fans will find this collection ripe for the tasting." -- Kirkus Reviews
or
Buy Here
Copyright © 2020 American Booksellers Association