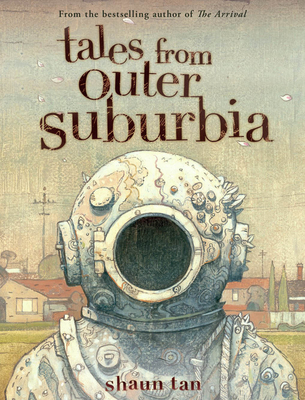 An exchange student who's really an alien, a secret room that becomes the perfect place for a quick escape, a typical tale of grandfatherly exaggeration that is actually even more bizarre than he says... These are the odd details of everyday life that grow and take on an incredible life of their own in tales and illustrations that Shaun Tan's many fans will love.

Praise For Tales From Outer Suburbia…

Praise for Tales from Outer Suburbia

"Tales from Outer Suburbia is not quite like anything else, and that's perhaps the best thing of all about it, opening up reading as a sort of strong, wild and individual activity." -- Chicago Tribune

"Mesmerizing... Such visual eloquence can only motivate readers to seek out any future graphic novels from Shaun Tan, regardless of where they might be shelved." -- New York Times Book Review

* "A silent, fantastical masterpiece... Filled with both subtlety and grandeur, the book is a unique work that not only fulfills but also expands the potential of its form." -- Booklist, starred review