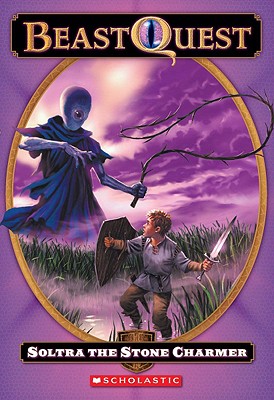 New Beasts. Old Magic.
Tom is going home.
Throughout his quest, he's imagined the day he'd finally get to return to Errinel, safe in the knowledge that he'd kept the kingdom safe.
But Malvel has other ideas. Eager for revenge, the Dark Wizard has unleashed his latest Beast, Soltra the Stone Charmer, into the marshes that border Tom's own village. And as he races forward to meet the next Beast, all Tom can think about is his family--which is exactly what Malvel wants . . .

Sadly, Adam does not have his own Ice Dragon or Ghost Panther. But he really wishes he did!"

Praise For The Golden Armour: Soltra the Stone Charmer…

This boy-vs-dragon tale, the first in the BeastQuest series, makes for an ideal pre-Hobbit read and sword-and-sorcery introduction. Tom lives in the village of Errinel with his blacksmith uncle; his mother died when he was a baby, and his father left not long after for a quest from which he never returned. When the crops in Tom's village start to burn and the horses turn up dead, villagers begin to suspect a curse. Tom (for whom "the closest he came to thrilling quests was when he ran errands for his uncle") volunteers to travel to see King Hugo and enlist his help.
The author packs a great deal of action into this brief tale. When Tom arrives at the palace, he learns that problems extend well outside his village--others report tidal waves and blizzards, all thought to be the work of "the Beasts." The king reveals that the Dark Wizard Malvel is to blame, and recognizes Tom as the son of Taladon, entrusting the boy with a silver key that can unlock the charmed collar on Ferno the Fire Dragon and release the beast from Malvel's control. This debut tale in an episodic chain of one-beast-per-volume battles (Tom successfully completes the inaugural quest, of course), makes for a promising start to a fantasy franchise with a likable yound hero and a refreshingly wide-eyed, old-fashioned approach to the genre.