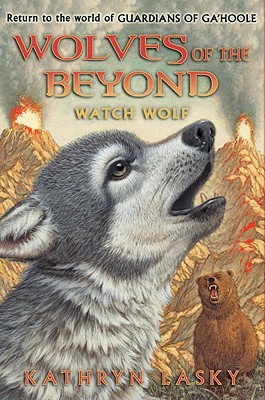 Wolves of the Beyond #3

A wolf's eye view of the legends of Ga'Hoole in this stirring third installment of the Wolves of Beyond series by bestselling author Kathryn Lasky.

Born with a twisted paw, Faolan was abandoned as a wolf pup and left to die. But not only did he survive and make it back to the wolf clan, he proved himself to be one of the most worthy wolves of all.

But just as Faolan is about to take his place as one of the revered Wolves of the Watch, a fellow watch wolf goes missing. Faolan is sent to track her down and makes a horrifying discovery - she has been kidnapped by bears. A war is coming between the wolves and the bears, and only Faolan can stop it.

Praise For Wolves of the Beyond #3: Watch Wolf…

Praise for the first book in the Wolves of the Beyond series.

"This is a soulful, searching read consumed with the spiritual journeys of animals and the ethereal connection between slayer and slain. [W]ith an invigorating ending that bodes well for the next volume." - Booklist

"The author builds a captivating world of forest, snow and volcanoes populated by intelligent animals and weaves a compelling story sure to bring readers back for the second installment." - Kirkus

Kathryn Lasky is the Newbery Honor-winning author of over one hundred books for children and young adults. Her beloved Guardians of Ga’Hoole fantasy series has sold more than 4 million copies, and she is the author of the Daughters of the Sea series, the Wolves of the Beyond series, as well as A TIME FOR COURAGE and other Dear America titles. Kathryn has also written a number of critically acclaimed nonfiction titles, such as BEYOND THE BURNING TIME and TRUE NORTH. She lives with her husband in Cambridge, MA.