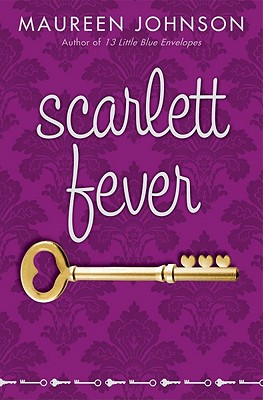 From top-selling author Maureen Johnson comes the second book in the trilogy about a girl and her hotel.
Ever since Mrs. Amberson, the former-aspiring-actress-turned-agent, entered Scarlett Martin's life, nothing has been the same.

She's still in charge of the Empire Suite in her family's hotel, but she's now also Mrs. Amberson's assistant, running around town for her star client, Chelsea - a Broadway star Scarlett's age with a knack for making her feel insignificant.

Scarlett's also trying to juggle sophomore year classes, her lab partner who is being just a little TOO nice, and getting over the boy who broke her heart.

"I loved this one... It's charming in a wonderfully quirky kind of way." - Becky's Book Reviews (blog)

"Readers of Suite Scarlett will be absolutely delighted with this second installment." - TeenReads.com

Maureen Johnson is the author of SUITE SCARLETT, SCARLETT FEVER, THE KEY TO THE GOLDEN FIREBIRD, 13 LITTLE BLUE ENVELOPES, THE BERMUDEZ TRIANGLE, DEVILISH, and GIRL AT SEA. She lives in New York City.
or
Not Currently Available for Direct Purchase