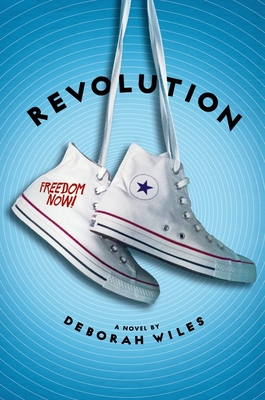 *A 2014 NATIONAL BOOK AWARD FINALIST*
It's 1964, and Sunny's town is being invaded. Or at least that's what the adults of Greenwood, Mississippi, are saying. All Sunny knows is that people from up north are coming to help people register to vote. They're calling it Freedom Summer.
Meanwhile, Sunny can't help but feel like her house is being invaded, too. She has a new stepmother, a new brother, and a new sister crowding her life, giving her little room to breathe. And things get even trickier when Sunny and her brother are caught sneaking into the local swimming pool--where they bump into a mystery boy whose life is going to become tangled up in theirs.
As she did in her groundbreaking documentary novel COUNTDOWN, award-winning author Deborah Wiles uses stories and images to tell the riveting story of a certain time and place--and of kids who, in a world where everyone is choosing sides, must figure out how to stand up for themselves and fight for what's right.

Deborah Wiles is the author of the picture book Freedom Summer and the novels: Love, Ruby Lavender; The Aurora County All-Stars; and Each Little Bird That Sings, a National Book Award finalist, and A Long Line of Cakes. She is also the author of the documentary novels Countdown and Revolution, a National Book Award Finalist, and Anthem. She has vivid memories of ducking and covering under her school desk during air-raid drills at the time of the Cuban Missile Crisis. She also sang in the Glee Club, was a champion speller, and hated Field Day. Deborah lives in Atlanta, Georgia. You can visit her on the web at deborahwiles.com.

Praise For Revolution (The Sixties Trilogy #2)…

Praise for THE SIXTIES TRILOGY #1: COUNTDOWN:
* "Wiles skillfully keeps many balls in the air, giving readers a story that appeals across the decades as well as offering enticing paths into the history." -- BOOKLIST, starred review
* "The larger story . . . told here in an expert coupling of text and design, is how life endures, even triumphs, no matter how perilous the times." -- HORN BOOK, starred review
* "References to duct tape (then newly invented), McDonald's and other pop culture lend authenticity to this phenomenal story of the beginnings of radical change in America." -- KIRKUS, starred review
* "Wiles palpably recreates the fear kids felt when air-raid sirens and duck-and-cover drills were routine . . . this story is sure to strike a chord with those living through tough times today." -- PUBLISHERS WEEKLY, starred review

Kirkus Starred Review
Freedom Summer in 1964 Mississippi brings both peaceful protest and violence into the lives of two young people.

Twelve-year-old Sunny, who’s white, cannot accept her new stepmother and stepsiblings. Raymond, “a colored boy,” is impatient for integration to open the town’s pool, movie theater and baseball field. When trained volunteers for the Council of Federated Organizations—an amalgam of civil rights groups—flood the town to register black voters and establish schools, their work is met with suspicion and bigotry by whites and fear and welcome by blacks. In this companion to Countdown (2010) (with returning character Jo Ellen as one of the volunteers), Wiles once again blends a coming-of-age story with pulsating documentary history. Excerpts from contemporary newspapers, leaflets and brochures brutally expose Ku Klux Klan hatred and detailStudent Nonviolent Coordinating Committee instructions on how to react to arrest while on a picket line. Song lyrics from the Beatles, Motown and spirituals provide a cultural context. Copious photographs and subnarratives encapsulate a very wide range of contemporary people and events. But it is Sunny and, more briefly, Raymond who anchor the story as their separate and unequal lives cross paths again and again and culminate in a horrific drive-by shooting. A stepmother to embrace and equal rights are the prizes—even as the conflict in Vietnam escalates.

*"It’s an ambitious, heady endeavor that succeeds wonderfully in capturing the atmosphere of that pivotal and eventful summer, with the documents offering a broader context"- Horn Books, starred review

*"Though the novel is long, it's also accessible and moving, and it will open many eyes to the brutal, not-so-distant past out of which a new standard of fairness and equality arose. "- Publishers Weekly, starred review
or
Buy Here
Copyright © 2020 American Booksellers Association