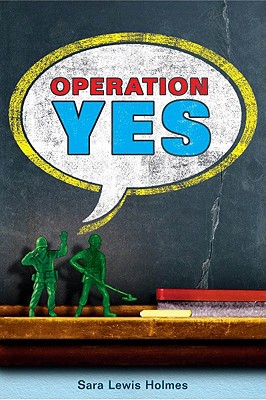 No one in her sixth-grade class knows quite what to make of Ms. Loupe, with her short hair, her taped square "stage" on the floor, and the interest in improvisational theatre. After all, their school is on an Air Force base--a place that values discipline more than improv. But her students soon come to love her fresh approach; and when her dear brother goes missing in Afghanistan, and Ms. Loupe herself breaks down, they band together to support their teacher. What starts as a class fundraiser expands into a nationwide effort for all injured troops, and an amazing vision of community and hope.

"[T]he most buoyant example of ensemble work since E. L. Konigsburg's The View from Saturday (1996) and the best of Gregory Maguire's Hamlet Chronicles. . . . Though only a small part is actually written as a script, the entire tale is purest stagecraft: quick, funny, sad, full of heart, and irresistibly absorbing." -- Booklist, starred review

“[T]his story of middle-school classmates who come together to honor their teacher and her war-injured brother entertains. . . . Miss Loupe is the kind of teacher every kid dreams about, and the “all for one, one for all” mentality that comes through as the students band together is inspiring.” -- Publishers Weekly

“In this lively, often funny novel, an enthusiastic teacher brings improv to restless sixth graders at a rundown school on a North Carolina Air Force base. . . . Pitched to readers in both military and civilian families, this engaging story avoids larger questions of war and peace, focusing instead on how they affect the lives of American kids who deal with the consequences every day.” -- Kirkus Reviews

“The classroom is often a place of lessons, but Holmes tells her story–infused with details of military life–with heart and energy, and leaves any didacticism at the door. Sixth graders, military brats or not, will identify with this rich cast.” -- Horn Book

Sara Lewis Holmes is the author of Letters from Rapunzel and Operation Yes. As the wife of an Air Force pilot, she has lived, written, and raised a family in eleven states and three countries, including Germany and Japan. She currently resides in Washington, DC. Please visit her online at www.saralewisholmes.com and @saralewisholmes.
Loading...
or
Not Currently Available for Direct Purchase