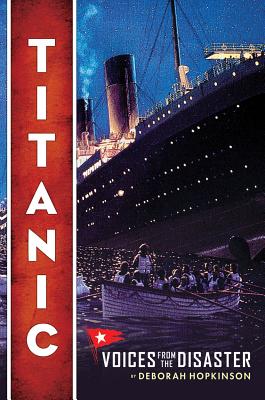 Voices From the Disaster

“Hopkinson's account of the Titanic tragedy is quite possibly the standard against which all future tellings will be measured. Her authoritative work is both comprehensive and very readable. By focusing on individuals more than sensational events, Hopkinson ensures that readers will never forget the sinking's human toll. This riveting book, beautifully designed, will appeal to a wide range of readers, including adults. Period photos, a glossary, timeline, biographical sketches, and excerpts of survivors' letters are included. This is nonfiction at its finest!”
— Christopher Rose, Andover Bookstore, Andover, MA
View the List

Scheduled to coincide with the 100th anniversary of the tragic sinking of the TITANIC, a topic that continues to haunt and thrill readers to this day, this book by critically acclaimed author Deborah Hopkinson weaves together the voices and stories of real TITANIC survivors and witnesses to the disaster -- from the stewardess Violet Jessop to Captain Arthur Rostron of the CARPATHIA, who came to the rescue of the sinking ship. Packed with heartstopping action, devastating drama, fascinating historical details, loads of archival photographs on almost every page, and quotes from primary sources, this gripping story, which follows the TITANIC and its passengers from the ship's celebrated launch at Belfast to her cataclysmic icy end, is sure to thrill and move readers.

Deborah Hopkinson is the acclaimed author of over forty award-winning books, including Shutting Out the Sky, an NCTE Orbis Pictus Honor Book and a Jane Addams Peace Award Honor book; Up Before Daybreak, a Carter G. Woodson Honor Award winner; Titanic: Voices from the Disaster, a YALSA Excellence in Nonfiction Finalist and Sibert Honor book; Courage & Defiance, Stories of Spies, Saboteurs, and Survivors in World War II Denmark, a Sydney Taylor Notable book and Orbis Pictus Recommended title; and Dive! World War II Stories of Sailors & Submarines in the Pacific. Deborah lives with her family near Portland, Oregon.

Praise For Titanic: Voices From the Disaster…

Praise for Titanic: Voices from the Disaster:

"An affecting portrait of human ambition, folly and almost unbearable nobility in the face of death." -- The Wall Street Journal

"A meticulous recounting of the disaster... Hopkinson's reporting is so rich with information that it will be equally fascinating to young readers and adults alike." -- Los Angeles Times

*"Hopkinson knows precisely what's she doing in her coverage of the Titanic disaster... [A] fine book." -- The Horn Book, starred review

Praise for Up Before Daybreak:
*"Rarely have the links between northern industry, southern agriculture, slavery, war, child labor, and poverty been so skillfully distilled for this audience." -- Booklist, starred review

In what’s sure to be a definitive work commemorating the 100th anniversary of the sinking of the RMS Titanic, Hopkinson offers a well-researched and fascinating account of the disaster.

On Monday, April 15th, 1912, the magnificent Titanic sank after striking an iceberg in the North Atlantic. Of the 2,208 people on board, only 712 survived. It’s a well-known story, though maybe not to young readers, who, if anything, might have seen the movie. Hopkinson orchestrates a wealth of material here, using a third-person narrative voice to tell the story while incorporating eyewitness accounts of people on the “most luxurious ship the world had ever seen.” A huge number of archival photographs and reproductions of telegrams, maps, letters, illustrations, sidebars and even a dinner menu complement the text, yielding a volume as interesting for browsing as for through-reading. The voices include a stewardess, a science teacher, a 9-year-old boy, the ship’s designer, the captain and a mother on her way to a new life in America. Best of all is the author’s spirit: She encourages readers to think like historians and wonder what it would have been like on the Titanic and imagine each character’s story. Fifty pages of backmatter will inform and guide readers who want to know even more.

A thorough and absorbing recreation of the ill-fated voyage.(Nonfiction. 8-16)

As the 100th anniversary of the sinking of the Titanic approaches, there is a whole new output of books reexamining and updating the information about the tragedy. This one weaves together the memories and writing of the survivors, and what makes it stand out is the intimacy readers feel for the crew and passengers. The story itself hasn’t changed, but through Hopkinson’s work, young people get to know and care deeply about the people involved. Children, stewards, officers, and passengers from all three class designations are included, and their stories combine to recount the events of that fateful April night. Readers with even a passing knowledge of the Titanic will find themselves drawn into the drama and heartbroken at the inevitable end. Period photographs, artwork, diagrams, and maps appear throughout to illustrate points and help clarify events. Traditionally accepted details about the ship from its construction to its luxurious appointments, are discussed, and some of the controversies that have arisen since the wreck was found, but the real focus here is on the people and the narrative. Students looking for real-life drama will find this an absorbing and richly satisfying read.–Jody Kopple, Shady Hill School, Cambridge, MA

Hopkinson knows precisely what’s she doing in her coverage of the Titanic disaster: providing young readers with a basic introduction to the event without overdramatizing, drawing unwarranted conclusions, or prolonging the ordeal. She begins her account as the ship embarks on its maiden voyage and, once it sets sail, flashes back to cover its construction and grandeur as well as some of the crew’s responsibilities, which play major roles in the sinking of the ship and the rescue of the passengers. Hopkinson also introduces her “characters,” real survivors whose voices relay many of the subsequent events. She includes crew members as well as those traveling in first, second, and third class, showing both the contrasts between them as the voyage begins and the horror that binds them by night’s end. In this admirably restrained account, Hopkinson covers, but doesn’t dwell upon, the foreshadowing of iceberg reports, the heartbreaking choices in boarding the (too few) lifeboats, and the agony of those dying in the freezing water. For interested readers who want to read in more detail, Hopkinson includes comprehensive chapter notes, a listing of sources, and questions to get young people started on their own Titanic quests. Archival photographs, a timeline, a selected list of facts, short biographies of those mentioned, excerpts from selected survivor letters, a glossary, and an unseen index complete this fine book.

Hopkinson puts a human face on the Titanic’s sinking in this riveting nonfiction chronicle of the ship’s collision with an iceberg and the tragic aftermath. She threads together the stories of many passengers and crew members, focusing on a handful of survivors that includes an Argentine-born stewardess, a rambunctious nine-year-old British boy, a science teacher from England, and an American teenager traveling with his parents. The author quotes these four and others freely, their voices forming a deeply intimate account of the tragedy. Hopkinson packs her thoroughly researched story with a wealth of information about the ship itself (this book is an invaluable resource for students), and her portraits of the shipmates are fully realized and often heartbreaking. Chapters detailing the sinking, the scramble for lifeboats, and the harrowing wait for the Carpathia’s arrival are fast-paced and riveting. Photos of the ship, the (purported) iceberg, telegrams sent to and from the Titanic, and of the survivors’ rescue add significant context and amplify the immediacy of the drama. Ages 8–12. Agent: Steven Malk, Writers House.