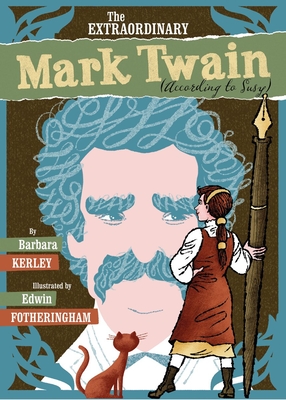 The Extraordinary Mark Twain (According to Susy)

Praise For The Extraordinary Mark Twain (According to Susy)…

From The New York Times:

What if your child wrote a book about your life? How would the story of your days read when channeled through those shrewd, ­judgmental eyes? Would you seem like God when God walked in the garden, or would you seem like Papa Doc, the tyrant, the crafter of rules and breaker of ­treaties?

This is what happened to Mark Twain. His 13-year-old daughter, Susy, in secret, chronicled his life. From her notes, the source of a great new book — \u201cThe Extraordinary Mark Twain\u201d — you can conclude either that he was the best father who ever lived, or that he was simply favored by his era, that time before muckraking memoirs and celebrity-daughter tell-alls. Or perhaps a bit of both.

Written by Barbara Kerley and illustrated by Edwin Fotheringham, \u201cThe Extraordinary Mark Twain\u201d began with one of those tantalizing tidbits writers sometimes stumble across. Kerley, whose previous works include \u201cWhat to Do About Alice?\u201d and \u201cWalt Whitman: Words for America,\u201d happened to spot a footnote about a \u201cbiography\u201d that Susy, Twain\u2019s eldest daughter, had written. \u201cI was immediately intrigued,\u201d Kerley writes in an author\u2019s note. \u201cHaving been the parent of a 13-year-old girl myself, I know they tend to call it like they see it.\u201d

Kerley has used Susy\u2019s text, from a notebook filled with the neat cursive of the day, to construct a kind of dual bio­graphy, the story of Twain and the story of Susy telling the story of Twain. Every few pages, Kerley includes samples of the journal, minibooks stapled to the spine: \u201cHis favorite game is billiards,\u201d Susy writes, \u201cand when he is tired . . .  he stays up all night and plays. . . . It seems to rest his head.\u201d

Twain is the great hero of American literature, the father of us all, the author of \u201cThe Adventures of Huckleberry Finn,\u201d but also the world traveler and story-spinner. Kerley gives us a quick sketch of the boy who became the artist, the early years in Hannibal, Mo., the life of the steamboat pilot, the life of the newspaperman and the life of the young author. It\u2019s a story told also in Fotheringham\u2019s pictures, which suggest works of American folk art — the side-wheelers crowding the harbor, the green hills above the river town, the author laughing as he reads his own book.

But more than the public man, what you get here is the husband and father, the private figure named Samuel Clemens. The authors — by the end, Barbara Kerley and Susy Clemens seem like co-authors of this book — tell you what you want to know about Twain: He paced the floor between courses at meal time; he threw his shirts out the window; he wrote all day, breakfast till dinner, filling 50 pages at a pop; he talked to the cat; he hid from fans but now and then got stuck when (Susy quoting Twain) \u201cmentally dead people brought their corpses with them for a long visit.\u201d

Susy\u2019s physical description of her father fills me with joy, as it\u2019s just the way a man wants to be seen by his progeny: \u201cHe has beautiful curly gray hair, not any too thick, or any too long, just right; a roman nose, which greatly improves the beauty of his features, kind blue eyes, and a small mustache. . . . In short he is an extrodinarily fine-looking man. All his features are perfect exept that he hasn\u2019t extrodinary teeth.\u201d

Other than that last part, I mean.

Though Susy began writing in secret, Twain soon discovered what she was up to. \u201cAfter that,\u201d Kerley writes, \u201cPapa sometimes made pronouncements about himself at the breakfast table just to help his bio­grapher along.\u201d Years later, Twain published parts of Susy\u2019s diary in The North American Review,

Edwin Fotheringham’s stylish, award-winning illustrations have graced the pages of The New Yorker, The Wall Street Journal, The New York Times, and many other publications. He has illustrated numerous highly acclaimed nonfiction picture books, such as Barbara Kerley's What to Do About Alice?, a Sibert Honor Book and a Boston Globe-Horn Book Award Honor Book; The Extraordinary Mark Twain (According to Susy), a New York Public Library Best Children's Book; Those Rebels, John &amp; Tom, an NCTE Orbis Pictus Award Honor Book; and A Home for Mr. Emerson, a NAPPA Gold Award winner; as well as younger fiction picture books, such as Pam Muñoz Ryan's Tony Baloney and the eponymous beginning reader series, Jennifer Hamburg's Monkey and Duck Quack Up!, a spring 2015 Indie Favorite, and Andria Rosenbaum’s Big Sister, Little Monster. Ed lives in Seattle, Washington. Visit him online at edfotheringham.com.
Barbara Kerley is a two-time Sibert Honoree and a Boston Globe-Horn Book Honoree whose award-winning biographies include What to Do About Alice?, The Extraordinary Mark Twain (According to Susy), Those Rebels, John &amp; Tom, and A Home for Mr. Emerson, all illustrated by Edwin Fotheringham; Tigers &amp; Tea with Toppy, illustrated by Matte Stephens; and The Dinosaurs of Waterhouse Hawkins and Walt Whitman: Words for America, illustrated by Brian Selznick. Kerley's books have all been praised for their lively prose, meticulous research, and artistic presentation style. She lives in Portland, Oregon. Visit her online at barbarakerley.com.
Loading...
or support indie stores by buying on