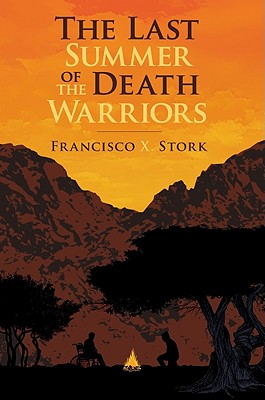 “In Fancisco X. Stork's latest, we meet Pancho, a quiet young man who has lost his family and is full of anger; D.Q., a brave young cancer patient who is facing his disease by writing the 'Death Warrior Manifesto'; and Marisol, the girl that they both love. Stork has the ability to write deeply interesting characters and keep the plot moving at a rapid pace.”
— Suzanna Hermans, Oblong Books & Music, Rhinebeck, NY
View the List

One is dying of cancer. The other's planning a murder.
When Pancho arrives at St. Anthony's Home, he knows his time there will be short: If his plans succeed, he'll soon be arrested for the murder of his sister's killer. But then he's assigned to help D.Q., whose brain cancer has slowed neither his spirit nor his mouth. D.Q. tells Pancho all about his "Death Warrior's Manifesto," which will help him to live out his last days fully--ideally, he says, with the love of the beautiful Marisol. As Pancho tracks down his sister's murderer, he finds himself falling under the influence of D.Q. and Marisol, who is everything D.Q. said she would be;and he is inexorably drawn to a decision: to honor his sister and her death, or embrace the way of the Death Warrior and choose life.

Nuanced in its characters and surprising in its plot developments--both soulful and funny--Last Summer is a buddy novel of the highest kind: the story of a friendship that helps two young men become all they can be.

"Stork's latest marks him as one of the most promising young adult authors of the new decade." -- The Horn Book, starred review

Francisco X. Stork is the author of Marcelo in the Real World, winner of the Schneider Family Book Award for Teens and the Once Upon a World Award; The Last Summer of the Death Warriors, which was named to the YALSA Best Fiction for Teens list and won the Amelia Elizabeth Walden Award; Irises; The Memory of Light, which received four starred reviews; and Disappeared, which also received four starred reviews and was named a Kirkus Best Book of the Year. He lives near Boston with his wife. You can find him on the web at franciscostork.com and @StorkFrancisco.
Loading...
or
Not Currently Available for Direct Purchase