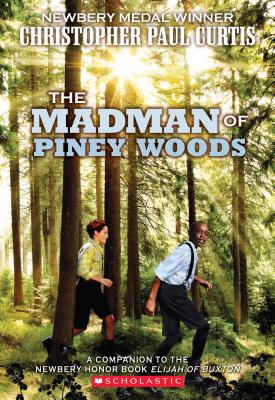 The Madman of Piney Woods

Benji and Red couldn't be more different. They aren't friends. They don't even live in the same town. But their fates are entwined. A chance meeting leads the boys to discover that they have more in common than meets the eye. Both of them have encountered a strange presence in the forest, watching them, tracking them. Could the Madman of Piney Woods be real?

In a tale brimming with intrigue and adventure, Christopher Paul Curtis returns to the vibrant world he brought to life in Elijah of Buxton. Here is another novel that will break your heart -- and fill it with joy and laughter, too.

Praise For The Madman of Piney Woods…

"Curtis deftly makes what might have been simply heart-rending hopeful and redeeming instead... a pleasure to read." -- New York Times Book Review

* "A delight, featuring the author's obvious love for his characters, his skillful use of sentiment, and his often hyperbolic humor... quintessential Curtis." -- Booklist, starred review

* "Beautiful storytelling as only Curtis can do it." -- Kirkus Reviews, starred review

* "Curtis masterfully interweaves goofy family vignettes, memorable characters, and thought-provoking themes into a page-turner with appeal to multiple audiences and tastes." -- Bulletin of the Center for Children's Books, starred review

Christopher Paul Curtis was awarded both a Newbery Honor and a Coretta Scott King Honor for his debut book, The Watsons Go to Birmingham -- 1963, and won the Newbery Medal and the Coretta Scott King Award for his second book, Bud, Not Buddy. Mr. Curtis is also the author of the Golden Kite Award-winning Bucking the Sarge, as well as Mr. Chickee's Funny Money, Mr. Chickee's Messy Mission, and the Newbery Honor book Elijah of Buxton.
Loading...
or
Not Currently Available for Direct Purchase