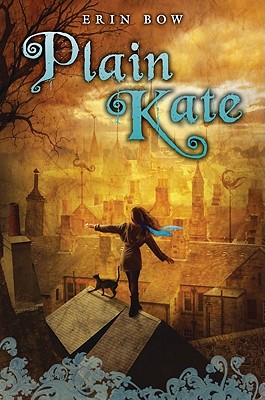 “Plain Kate is a gifted carver in a world where talent is perceived as witchcraft. When her father and many townspeople die of a flu, Plain Kate is forced to live on her own. To escape being burned as a witch, she trades her shadow for travel gear and her hearts desire. I was hooked till the end by this original, thought-provoking story!”
— Cinda Meister, Booksmart, Morgan Hill, CA
View the List

Plain Kate lives in a world of superstitions and curses, where a song can heal a wound and a shadow can work deep magic. As the wood-carver's daughter, Kate held a carving knife before a spoon, and her wooden charms are so fine that some even call her "witch-blade" -- a dangerous nickname in a town where witches are hunted and burned in the square.

"Plain Kate, [Bow's] first young adult novel, demonstrates a mature, haunting artistry... The plot unfolds with the swiftness and dramatic urgency of an adventure tale, yet each event has a measured gravity.... [An] outstanding novel." -- New York Times
“Bow seamlessly integrates ironic humor and existential distance, keeping readers, like Kate, quietly convinced that where there's life, there's hope…Realistic fiction fans may also be drawn to Kate's grueling, dramatic story, as under the fantasy elements lies an effective and moving coming-of-age novel.” -- Bulletin of the Center for Children's Books, starred review
“Bow's pellucid prose illuminates the contest between humanity and superstition, including the fear of witches that blights innocent lives. An ending sure to bring tears to readers' eyes concludes this stunning debut fantasy.” -- Horn Book
"Despite the talking animal (who nearly steals the show) and graceful writing (Kate carries Taggle around her neck, "draped bonelessly, like a fur collar with glittering eyes"), this is a dark and complex tale, full of violence--knives cut a lot more than wood. . . . Kate is undeniably a sympathetic character deserving of happiness." -- Publishers Weekly
"A haunting, chilling (but never gory or graphic) tale with a fantastic girl at its center." --Kirkus Reviews
“In her debut novel, poet Bow writes with an absorbing cadence, creating evocative images that trigger the senses and pierce the heart. With familiar folktale elements, she examines the dark corners of human fear and creates intriguing, well-drawn characters, including Taggle, Kate's talking cat, who adds a welcome lightness. . . . [W]ith this debut, Bow establishes herself as a novelist to watch.” --Booklist
“Kate is a stalwart, engaging heroine and Bow vividly evokes a soggy countryside of birch trees, babbling rivers and colourful Roamers. Magic here has its share of blood and death, its grief and powerful joy. Very satisfying reading.” -- Toronto Star
“[T]he lively presence of Taggle, irrepressible with his feline self-involvement and clever observations, brings elements of fun and friendship to Kate's journey. The novel will appeal to fans of Karen Cushman, with Kate as a strong, individualistic female protagonist, and those of Vivian Vande Velde, who also plays with the unpredictable wildness of magic.” -- VOYA
“[Plain Kate] is gorgeously well written, unafraid of plumbing joy and sorrow, and with a story that you can't bear to stop reading.” -- The Times

Erin Bow was born in the Midwest and studied particle physics in college, eventually working at the CERN laboratory near Geneva, Switzerland. She then decided to leave science in order to concentrate on her love of writing. She lives in Kitchener, Ontario, with her husband James and their two daughters. Erin Bow can be visited online at www.erinbow.com.
Loading...
or
Not Currently Available for Direct Purchase