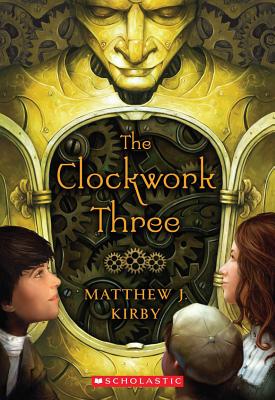 Giuseppe is an orphaned street musician from Italy, who was sold by his uncle to work as a slave for an evil padrone in the U.S. But when a mysterious green violin enters his life he begins to imagine a life of freedom.

Hannah is a soft-hearted, strong-willed girl from the tenements, who supports her family as a hotel maid when tragedy strikes and her father can no longer work. She learns about a hidden treasure, which she knows will save her family -- if she can find it.

And Frederick, the talented and intense clockmaker's apprentice, seeks to learn the truth about his mother while trying to forget the nightmares of the orphanage where she left him. He is determined to build an automaton and enter the clockmakers' guild -- if only he can create a working head.

Together, the three discover they have phenomenal power when they team up as friends, and that they can overcome even the darkest of fears.

Matthew J. Kirby is the critically acclaimed author of the middle-grade novels Icefall, which won the Edgar Award for Best Juvenile Mystery and the PEN Literary Award for Children's Literature; The Clockwork Three, which was named a Publishers Weekly Flying Start; The Lost Kingdom; Last Descendants, an Assassin's Creed novel; The Quantum League: Spell Robbers; and Cave of Wonders, the fifth book in the Infinity Ring series. He was born in Utah and grew up in Maryland, California, and Hawaii. Matthew is currently at work on his next novel.

Praise For The Clockwork Three…

Praise for The Clockwork Three:

"Part mystery, part adventures, part science project, The Clockwork Three is as imaginative as it is fun. Kirby's attention to detail and descriptive powers are fantastic. . . ." -- Deseret News
or
Not Currently Available for Direct Purchase
Copyright © 2020 American Booksellers Association