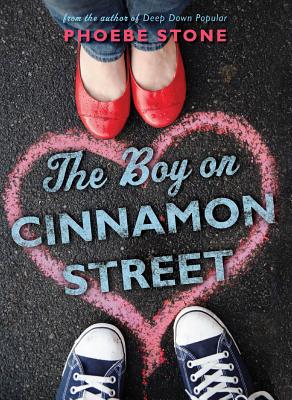 The Boy on Cinnamon Street (Hardcover)

“This tween story of first love will melt the hardest heart. Louise's quiet, wounded sadness touches both Henderson and the reader, who can't help but root for the young couple. The Boy on Cinnamon Street will appeal to Justin Bieber fans but will also be a great read for any mother-daughter book club.”
— Jill Hendrix, Fiction Addiction, Greenville, SC
View the List

A story about a wounded girl and the boy who won't give up on her.

7th grader Louise should be the captain of her school's gymnastics team - but she isn't. She's fun and cute and should have lots of friends - but she doesn't. And there's a dreamy boy who has a crush on her - but somehow they never connect. Louise has everything going for her - so what is it that's holding her back?

Phoebe Stone tells the winning story of the spring when 7th grader Louise Terrace wakes up, finds the courage to confront the painful family secret she's hiding from - and finally get the boy.

Phoebe Stone s first novel, ALL THE BLUE MOONS AT THE WALLACE HOTEL, was hailed as haunting and poetic by THE NEW YORK TIMES. Her first novel for Arthur A. Levine Books, DEEP DOWN POPULAR, received a starred review in BOOKLIST. THE ROMEO AND JULIET CODE received two stars. And her most recent title, THE BOY ON CINNAMON STREET, received a whopping four starred reviews. Phoebe lives in Middlebury, Vermont."

Praise For The Boy on Cinnamon Street…

"Most winning of all . . . is the romance itself, which bursts out in a joyful, honey-sweet dénouement that’s destined to be one of the great romantic moments in preteen fiction." - STARRED review The Bulletin of the center for Children's Books

"An outstanding tale of love, loss and the true power of friendship." - STARRED review Kirkus Reviews